As East Africa becomes warmer, the threat of climate sensitive diseases such as malaria, Rift Valley Fever and cholera is increasing 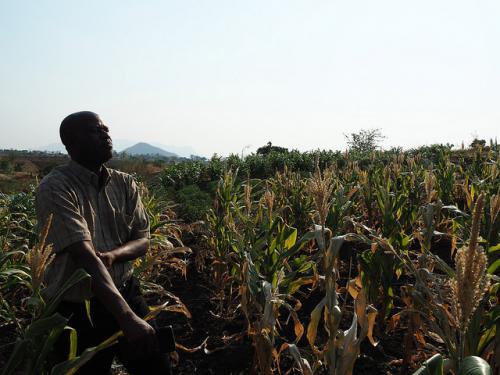 Climate change threatens to significantly increase the health risk of people living in the East African Highlands. In addition, droughts have intensified. These have have both short-term and long term effects on human health.

Yet there are no guidelines to inform health related decisions under climate change conditions. Nor has any mapping been carried out to indicate the extent of changes in the geographic range of climate sensitive diseases and climate change.

Climate change is a dynamic process that needs continuous monitoring so that appropriate responses can be worked out. For example, according to the Tea Research Foundation of Kenya and the Food and Agriculture Organisation Kenya’s average mean temperature has been rising at 0.02℃ every year since 1958. And during 1997/8 El Nino event, above normal temperatures were recorded. These were associated with epidemics of malaria and cholera in East Africa.

This is why there is an urgent need to address the new health risks posed by climate change.

Climate change may increase the risk of epidemics and outbreaks. This is because diseases have different sensitivities to climate. This could mean, for example, that there are changes in:

Changes to the patterns of cholera, malaria, Chikungunya, Yellow Fever and Rift Valley Fever can be expected.

Climate sensitive diseases have already been identified in Africa and are receiving attention globally. These include malaria, meningitis, cholera, arbovirus infections and diarrhoea.

Changes in climatic conditions have resulted in an increase in cases of malaria in the Kenya’s East African Highlands region. Arid lands are increasingly prone to flooding and aquatic systems have become reservoirs of cholera.

How can Kenya arrive at solutions?

Governments play a crucial role in mitigating climate change because they are signatories to international agreements such as the Sustainable Development Goals. These have a direct link to climate change adaptation strategies. And of course United Nations agencies have been instrumental in building international consensus on the effects of climate change and health.

But there is more they can do. Government health authorities have to provide disease prevention, maternal and curative services. They should also create national climate change adaptation policies that emphasise early warning and disaster prevention.

Weak public health institutions are highly vulnerable to the effects of climate change. Yet they are in the frontline in the event of disease outbreaks. This suggests that policy responses should be expanded to include other stakeholders, increased capacity to evaluate risk and adequate resources.

And countries can begin by improving the skills sets in health sciences, disease statistics and meteorology to enhance understanding of the relationship between diseases, climate change and variability.

It is heartening that East African countries have initiated regional guidelines for national policies to deal with the effects of climate change in the health sector. But much more needs to be done to ensure that research findings are better integrated into health sector policies.

The role of research

There should be support for research and capacity building. One route would be for the government to host research institutions with the remit of addressing new health threats and developing preventative strategies. Some countries, for example Kenya, have dedicated a climate and human health research unit.

Universities should be challenged to play a dual role in training and research. Many are already home to African experts on climate change. They are the most knowledgeable members of society and must lead in finding solutions.

There is tremendous opportunity for collaboration in East Africa. For example, each country could host an institution that has a particular interest in climate change driven research. The Kenya Medical Research Institute, for instance, has a climate and human health research programme addressing epidemic malaria in Kenya.

Some of the viable solutions for arriving at these research units includes developing mathematical models to illustrate the potential geographic spread of climate sensitive diseases.

Biologists and meteorologists should collaborate closely in data and knowledge sharing and in developing predictive tools that can help countries respond to epidemics before they happen.

Climate change will call for building new institutional and sectoral partnerships to bring in effective adaptations that are cost effective. This will require knowledge sharing being encouraged in regional economic blocs.

Funding agencies, including development banks, have traditionally been the source of research funding in Africa. But in recent years new funding mechanisms have facilitated research on the impact of climate change on diseases. For example, a project on the impact of climate sensitive malaria and cholera in the Lake Victoria Basin in East Africa was funded by Global Environmental Facility through System for Analysis, Research and Training, and Google has funded research on Rift Valley Fever.

Africa will require more adaptation funding from external sources. Here governments have a critical role to play in accessing research funding in a very competitive environment.