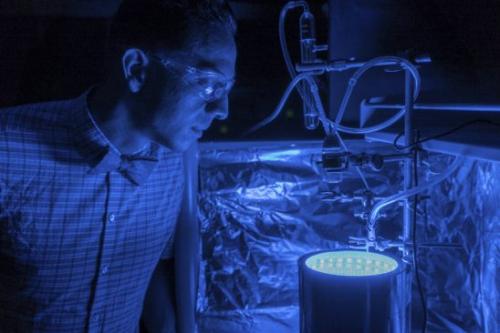 Scientists can be called frontrunners in the battle against climate change, leading with clean technology innovations to reduce or combat carbon emissions. A scientist’s work on “artificial photosynthesis” is the latest effort in this direction.

Fernando Uribe-Romo of the University of Central Florida, along with his team, has created a way to trigger a chemical reaction in a synthetic material to use light and break down carbon dioxide. What’s more? The carbon dioxide is converted to solar fuel which can be used to produce electricity. This is similar to photosynthesis performed by plants where they convert carbon dioxide and water into food in the presence of sunlight.

Calling the project a breakthrough, researcher Uribe-Romo told Down To Earth, "It is very important that we develop technologies that can help natural photosynthesis to fixate carbon dioxide, because the current rate of emissions is larger than the rate of fixation through photosynthesis, resulting in accumulation of CO2, which is the main cause of global warming and climate change. Discovering new technologies like the materials we prepare, can help reduce the amounts of CO2."

To allow the reaction, the researchers used a synthetic material called metal–organic frameworks, made using titanium metal and organic molecules that act as “light-harvesting antennae”. These antennae were designed to react to blue colour light and in its presence regulated amounts of CO2 were fed to the reactor. As per the researchers, the CO2 was converted to carbon, formate and formamides (two kinds of solar fuel).

Discussing his future plans for the project, Uribe-Romo said, "My current plans involve creating new materials that would increase the efficiency of the transformation, currently we have an efficiency of about 1.8%, we would like to see that number increased, and future materials could result in higher efficiencies." The researcher also wanted to utilise low-energy light such as red or infrared light for photo reduction, apart from the blue one currently being used.

“The idea would be to set up stations that capture large amounts of CO2, like next to a power plant. The gas would be sucked into the station, go through the process and recycle the greenhouse gases while producing energy that would be put back into the power plant,” he said in a press release.