The Godot of climate change

In Samuel Beckett’s play, Godot never arrived till the end, leaving two characters anticipating his arrival. Will the Godot of climate change ever come? 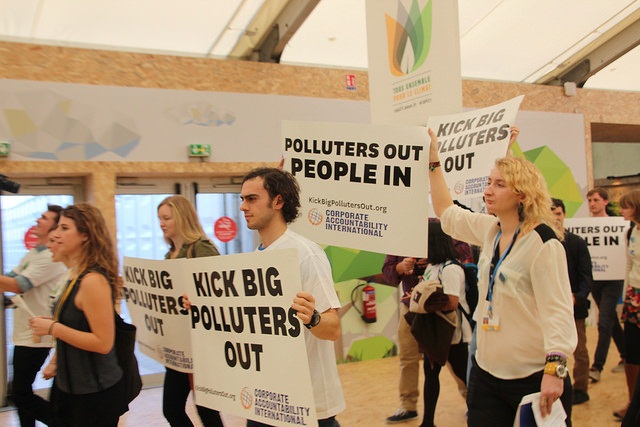 US secretary of state John Kerry’s speech at COP 21 in Paris was nothing short of passionate. Like a heat-seeking missile, as he was referred to by his colleague Todd Stern, the US special envoy on climate change, Kerry, went on to hit one target after another on how the problem of global warming could be solved.

Throughout his speech, though, he deliberately kept missing only one target: namely the role of his own country in creating the problem and then denying that role.

He began by invoking Godot, of Waiting for Godot fame, urging that the theme of Samuel Becketts’s play should not apply to action on global warming. Instead his answer to overcoming climate change was clean energy policy.

“We have the solution,” Kerry said. “The solution to climate change is energy policy. Sure, we are going to pump gas and oil for years, we know that. But even nations whose economies largely depend on the production of oil are diversifying into renewable energy,” he said.

In his 45-minute speech, Kerry talked of how Dubai was spending US $ 27 billion to install solar panels on every roof in the city; how the climate deal with China in 2014 has removed barriers with its arch-rival in the climate conference; a mention of Indian Prime Minister Narendra Modi’s role in Mission Innovation, the clean energy programme; how public banks have scaled up climate lending; and a host of other things.

He also went to pledge doubling public grant-based adaptation investment from US $ 400 million to 800 million after 2020. His speech ended with a profuse round of applause.

But his speech missed a key confession that probably could have led to an ambitious climate change agreement as early as 1997 when the Kyoto protocol was signed.

The secretary’s only allusion to it was that it was hard to sell the protocol on the floor of the Senate. This decision of the US not to join the legally-binding climate change treaty spiralled the world into a trajectory whose consequences are disastrous.

More than 17 years have passed since the country, which accounts for 21 per cent of the emissions, has decided to take some amount of cognisable action to cut greenhouse gases. And now its Secretary of State wants to become a motivational leader on climate change action.

Perhaps the US team in Paris should be the first he should motivate.

In his speech, Kerry referred to extreme weather events becoming more frequent and deadlier. He alluded to 19 of the past 20 years being the warmest, with July of 2014 being the hottest month ever recorded.

That, again, leads to a pertinent question. How much of it was due to the hiatus of the US from climate change reduction efforts? He said that even if the industrialised world’s emissions went down to zero, it would still be not enough to avert climate change because the developing world was responsible for 65 per cent of emissions.

This sounded like the lamest excuse one has heard from a developed country negotiator, in terms of ambition, during the first 10 days of the climate change negotiations.

Kerry still needs to be applauded for talking and trying to reach out to rest of the world to take action on climate change. For his country, even before there was enough evidence of climate change, jumped at the first opportunity to pass a law—the Byrd-Hagel resolution of July, 1997—that would forbid it from taking climate action.

We know that in Beckett’s play, the characters Vladimir and Estragon never get to see Godot even till the end, though they wait for him endlessly. The US is the Godot of climate change negotiations. Has Godot finally arrived? The world is waiting to know.