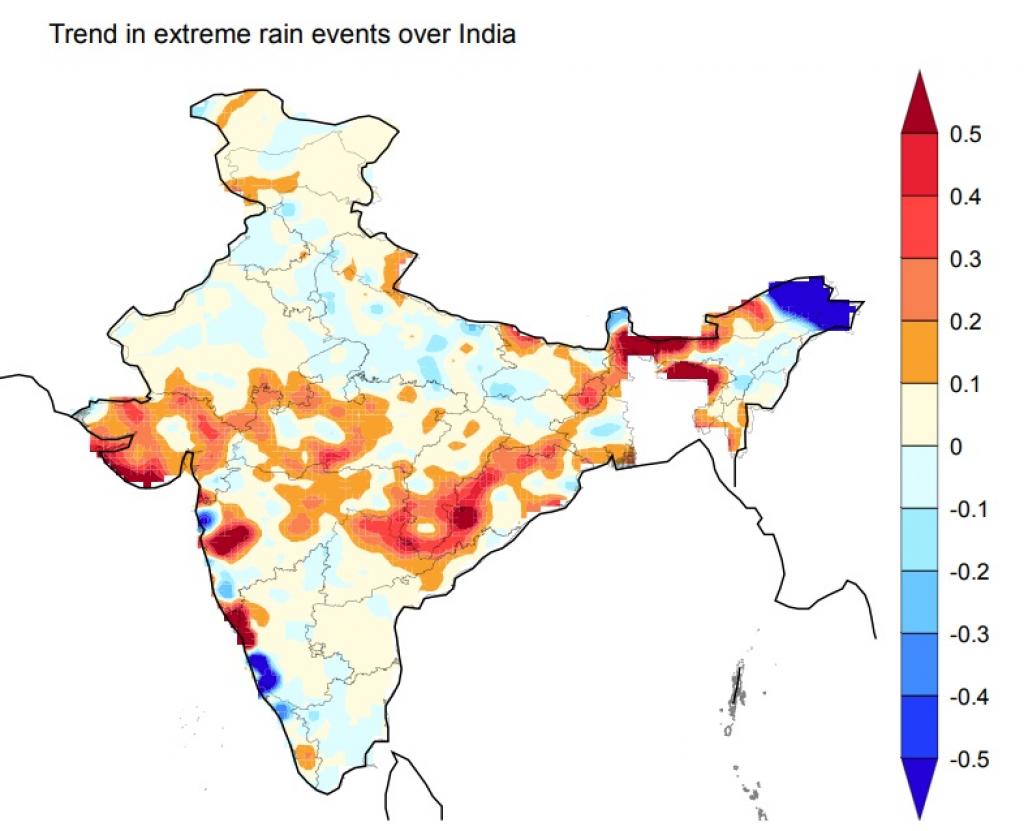 The Indian summer monsoon has changed. Successively unpredictable and volatile monsoons have ratcheted up the spectre of a “new normal” in monsoons- an alternating assault of extreme rain and absolutely none. However, evidence for this change that is underway and its pathways is still being put together. Research published today in Nature Communications goes some way in explaining the newfound extreme nature of our monsoons. The study finds that widespread extreme rain events over central India have increased three-fold in the 66-year period between 1950 and 2015. The study notes a 10-30 per cent increase in rainfall events over the region where more than 150 mm of rain is registered in a day has been occurring despite a general weakening of monsoon circulation.

According to the paper, while monsoon rainfall over central India from June-September has decreased by about 10 per cent during the study period, the frequency of extreme rain events has increased by a staggering 75 per cent, indicating a rate of increase of more than one event per year. While this may not seem like much at first sight, the cumulative effect of such a trend over a long period of time is likely to be devastating.

Extreme rain despite less moisture in the atmosphere

Interestingly, the study also notes that the increase in observed extreme weather events has occurred despite a decline in moisture levels in the atmosphere, which were earlier considered critical for widespread heavy precipitation. Equally interesting is the negative correlation found between extreme events and surface temperatures in the region. 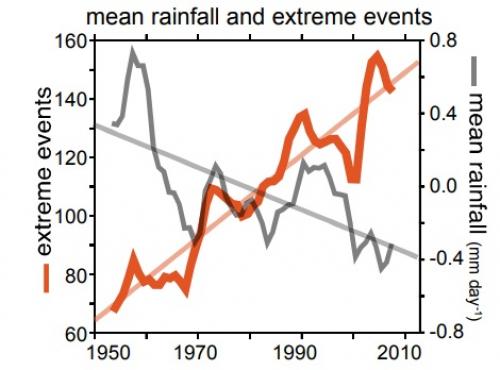 To determine the mechanism and source of the moisture for the extreme rain events, the multi-institutional team, led by researchers from the Indian Institute of Tropical Meteorology (IITM) in Pune, looked at widespread events where extreme events were occurring at the same time in 10 or more grid points or over an area of about 7500 sq km. Apart from a three-fold increase in the 66-year study period, analyses of the events also show that the increasing trend is homogenous over the central India belt from Gujarat and Maharashtra in the west to Odisha and Andhra Pradesh in the east.

Role of the Arabian Sea

Traditionally, atmospheric lows and cyclonic depressions forming over the Bay of Bengal have been associated with surges in monsoon activity. However, the current paper shows that while this circulation has been weakening, the increase in extreme events over central India is rather linked to moisture-laden winds originating from the Arabian Sea. The study finds that along with an increased variability, monsoon winds from the Arabian Sea have been driving surges of moisture supply and causing heavy precipitation events across central India. Researchers used reanalysis modelling for the entire study period to show that low-level monsoon westerlies from the Arabian Sea have grown stronger and are increasing the probability of extreme rain events over central India.

To further validate this point, researchers used Dynamic Recycling Modelling (DRM) to trace the contribution of different sources to the precipitation over a region. The modelling revealed that the largest contributor—providing more than one-third of the moisture involved in extreme rain events over central India—is the Arabian Sea. The other sources were found to be locally recycled moisture (29 per cent), the Bay of Bengal (26 per cent) and the central Indian Ocean (nine per cent).

In recent years, flooding events have become more common and widespread than ever before. The alternating spells of extreme wetness and dryness have challenged classical definitions associated with the summer monsoon. Climate projection models predict an increase in extreme precipitation events over the subcontinent over the century in a warming world. The current study estimates that around 500 million people stand to be at risk by a continued rise in the frequency and severity of extreme weather events.

Although ominous in its analyses, the study does offer some hope in terms of likelihood of predicting such events beforehand. Researchers have found that the extreme weather events are preceded by warming of the sea surface as well as an increase in air temperature in the northern Arabian Sea and around Pakistan and northwest India respectively. They claim that the positive correlation between warming and extreme events opens up a window of about 2-3 weeks for predicting impending events.