As the global negotiations increasingly talk about the impacts of climate change on health, the upcoming UN CoP meet in Morocco will debate one important aspect: how to fund health adaptation 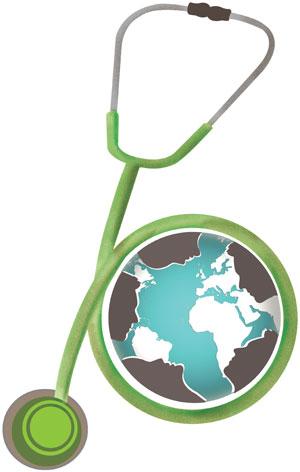 IN JULY this year, Siberia, one of the world’s coldest permanently inhabited towns with temperatures dipping to -70°C, reported cases of anthrax. It is a disease caused by bacterium Bacillus anthracis, which thrives in hot and humid tropics. Anthrax has already spread to 1,500 raindeer in the area and infected 40 residents. It has also killed a 12-year-old boy.

What prompted the outbreak? Recent high temperatures in the region, which have touched 35°C, have started melting the permafrost, exposing the carcass of an already-infected reindeer, which scientists say had remained frozen for over 75 years.

The anthrax outbreak is another rude reminder of how climate change is increasingly impacting our health and lives, a correlation that has largely been overlooked in the global climate change talks. Picture this: For the first 21 years of the annual Conferences of Parties (CoPs) to the UN Framework Convention on Climate Change (UNFCCC), health failed to feature in a big way. But the narrative is slowly changing.

The message from the recently concluded Second Global Conference on Health and Climate in Paris was clear—health has to be included “in an integral way in future climate negotiations”. The meeting held on July 7-8 by the World Health Organization (WHO) and the French government, which currently holds the presidency of CoP to the UNFCCC, could provide the right setting to include health in the upcoming CoP meeting in Morocco this year. Even WHO is now actively intervening in major multilateral fora to integrate health in climate talks. For example, a major effort is being made to include the health agenda in Habitat III, a UN Conference on Housing and Sustainable Urban Development, which will take place in Ecuador during October 17–20, 2016.

Somewhat fittingly, both the current CoP president from France and the next CoP president from Morocco sharply highlighted the urgent need to incorporate health concerns within the climate change negotiations at the July meeting. “Health and climate are inextricably linked because human health depends directly on the health of the planet,” said Segolene Royal, French environment and energy minister, and current CoP president during the conference. Her words were echoed by the UN climate forum’s interim head Richard Kinley. “The health sector has been underrepresented in this discussion when you think about the millions of lives that will be affected, and even ended,” he said.

Climate talks so far have focused on long-term projections of how the planet is likely to react to high levels of emissions. As a result, mitigation measures are centred on the cutting of emissions to limit their impacts. Health has featured, at most, as an additional concern covered by one of the numerous “side-events” that occur in conjunction with every round of climate negotiations. Practically though, there are probably few impacts of climate change that are as immediate as its impact on health. “The climate agenda often gets narrowly defined as only a development agenda and diverts attention from quality of life to a limited view of standard of living. But this is about larger well being and welfare around public health and food security. This demands leveraging of resources for climate mitigation to also strengthen adaptation strategies with health as the central focus,” says Anumita Roychowdhury, executive director, research and advocacy of non-profit Centre for Science and Environment, New Delhi.

The most apparent increase of the health burden due to climate change comes directly through extreme weather events. Currently, the earth is about 0.85°C warmer than what it was in 1880, before the proliferation of the most emission-intensive industries in the world, which have resulted in climate change. Many believe the additional warming has created havoc in several planetary processes including climatic flows and weather patterns. As the mercury continues to climb, the increase in global incidence of floods, droughts, storms and heat waves has become clearer (see cover story). The European heat waves of 2003 and 2010 are prime examples of climate change related extreme events. The heat waves are reported to have caused tens of thousands of deaths across Europe and Russia. In India, heat waves, droughts and extreme precipitation events have all been observed to have increased both in frequency and intensity. According to the Climate Vulnerability Monitor 2012, the estimated annual costs in China and India would be around US $450 million by 2030 due to environmental occupational risks (see ‘Disease trigger’).

While the health burden through weather might be the most obvious, potentially much more harming are the indirect effects. Protracted and frequent droughts, especially in Africa and Asia, have put a considerable burden on the agricultural output in several regions across both continents. The implications could be gigantic in terms of food security, nutrition and water availability as droughts become increasingly frequent. Another big concern is the additional burden of diseases and ailments. Changes in land-use, temperature, water distribution and precipitation are linked to the spread of malaria to newer areas. Similarly, incidence of dengue fever has been increasing with nearly 400 million infections currently being recorded globally each year. 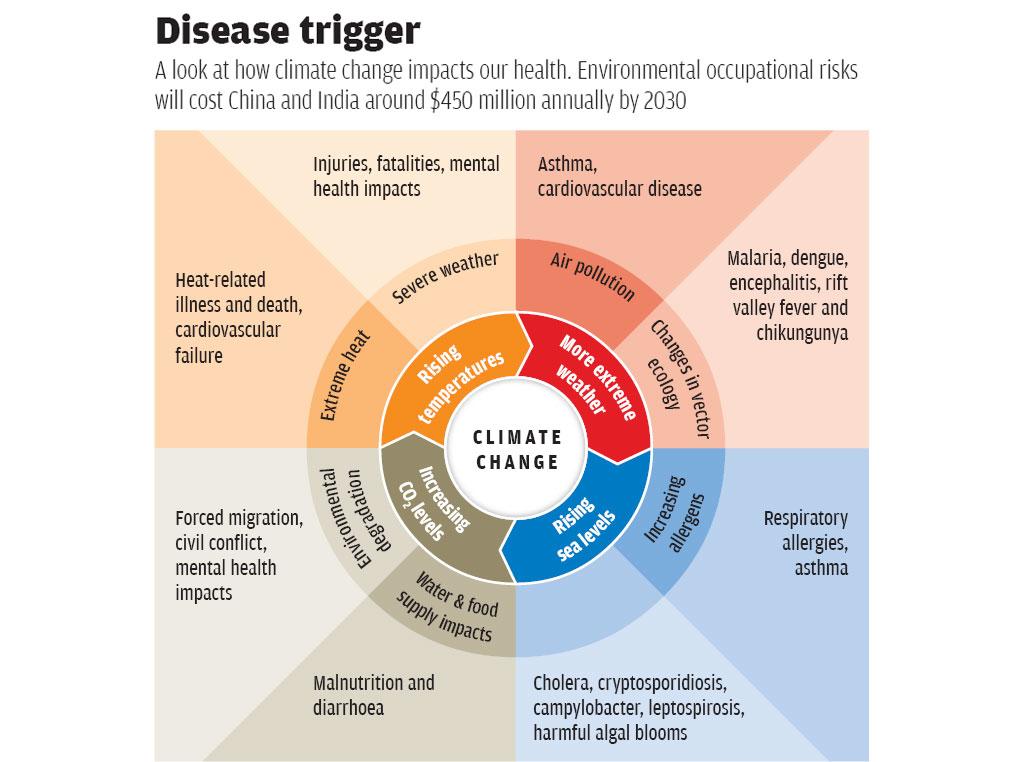 Chronic non-communicable infections and diseases too have been on the rise and the main culprit is suspected to be the declining air quality in urban regions. Fine particulate matter in air claim 7-8 million additional lives every year.

The list of causes and effects that link health and climate are endless, especially when one considers the social implications as well. The decision on consolidated action, though, has been slow to come.

A 2015 Lancet Commissions report on climate and health says health costs can be reversed significantly if emission-intensive activities are tightly regulated. While mitigation offers long-term co-benefits, it misses out on the immediacy of the health impacts of climate change. And this is where a global consensus becomes significantly important, even if not easy to achieve.

The biggest hurdle in achieving such a consensus lies in the mobilisation of finance for adaptation. The Paris agreement was accepted by 197 countries only after several years of seesawing between developed and developing nations regarding who is responsible for what and who will pay how much to tackle climate change. In the nine months that have followed, just 22 countries, mostly small and especially vulnerable to climate change, have ratified the agreement. A bigger concern is the apparent reluctance of countries like the US and the UK to ratify the agreement. Politicians in both the nations have complained about being shortchanged in the agreement. Without the US, the world’s leading consumer of fossil fuels, the agreement will remain little more than a paper tiger.

Also, pledges have chronically failed to transform into real capital. The 2009 Copenhagen commitment to mobilise $100 billion a year to tackle climate change has been met with tepid response. For one, there is still no consensus on what exactly counts as being a part of this fund. According to the Development Assistance Committee of the Organisation for Economic Cooperation and Development (OECD), in 2013, $52.2 billion were mobilised. That figure rose to $61.8 billion in 2014. The problem is that only around a fourth of this is tagged as non-repayable grants, while funds for adaptation form a miniscule portion. In 2013, it stood at just about $1.5 billion and in 2014, it was just close to $2 billion. According to a World Bank release on August 9 this year, US$ 81 billion were mobilised through six major multilateral development banks, though of this just $5 billion went towards improving adaptation. More telling is the fact that just $428 million came from non-multilateral development banks.

A similar tale is likely to play out even while dealing with the requirements to improve global public health in response to climate change. Health has traditionally been looked at as a sovereign subject of each nation. But climate change is global and so are its ramifications on health. Money spent now on strengthening public health systems, especially in poor and developing countries, can offset costs over the next 30 years or so. It is unlikely that a consensus on sharing health costs will be reached overnight or even over a single meeting in Morroco. But what is certain is that it is of paramount importance that the interconnectedness of the world in terms of health needs to be recognised soon.

(This article was published in the September 1-15, 2016, issue of Down To Earth under the headline "Unhealthy climate".)