Not only Vietnam, but the entire world is experiencing this sudden rise in temperatures

Global warming and heat wave has gripped the world tight and we got a proof the last weekend when mercury in Vietnam touched an all-time high. Huong Khe district in Ha Tinh province that’s located about 150 miles south of the capital Hanoi saw the temperature soar to 110 degrees Fahrenheit (43.4 degrees Celsius).

This is when the average temperature in the area is usually in the late 20s and early 30s in degrees Celsius around this time of the year. Temperature spikes of 3-4 degrees Celsius above normal are prevalent in many areas in the rest of the country.

This sudden rise of temperatures is not localised to Vietnam. Globally, the month of March was the second hottest ever recorded since observations began 140 years ago, according to the National Oceanic and Atmospheric Administration (NOAA).

The month was also the 43rd consecutive March and 411th consecutive month to record above average temperatures. The hottest month of March was in 2016 in the middle of an unusually strong El Nino phenomenon which had caused heat waves, droughts and coral bleaching incidents across the world, including in India.

“The first quarter of 2019 ended as the third warmest on record for the globe,” says NOAA in a press release. Most number of temperature departures were seen in Australia, southwestern and central Asia, Alaska and Canada.

This increase in temperatures has transpired as heat waves in many countries. 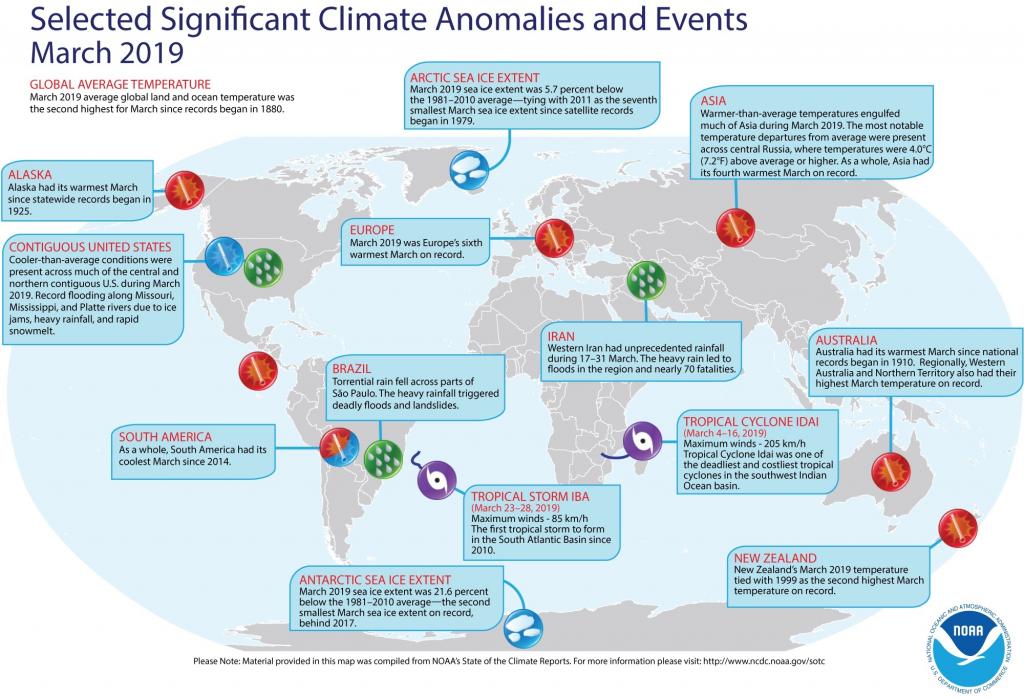 In January 2019, an extreme heat wave enveloped Australia which had suffered heat waves and droughts last year as well. According to the Australia Bureau of Meteorology, the days between January 12 and 17 are among the hottest days ever recorded in the country. The intense heat had created a pollution scare in Sydney due to an abnormal increase in Ozone levels. Earlier, in November, an intense heat wave had also led to deaths of 23,000 flying foxes in the country, according to media reports.

Malaysia too has been suffering from heat wave conditions since February which have continued into April. On April 23, 14 districts of the country experience moderate heat wave conditions, according to the Malaysian Meteorological Department. These districts recorded temperatures between 35 and 37 degrees Celsius for three days in a row, which is category 1 of the heat wave in Malaysia.

India has also been witnessing heat wave conditions since March this year, much earlier than normal. The temperatures first rose in the southern states of Tamil Nadu and Andhra Pradesh in early March. After this, in late March and early April, Kerala suffered an unusual heat wave which the local IMD blamed on the weak El Nino conditions in the central Pacific Ocean. “Temperature rise of one degree Celsius above normal is usual in pre-monsoon summer. But this time, it is up by 3 to 4 degrees Celsius. We see the development of El Nino behind this,” Santhosh K, IMD Kerala director, had told Down to Earth.

On April 1, the India Meteorological Department (IMD) declared that the central and north-western parts of India will be hotter than normal this summer. This prediction can be seen playing out in these regions already. In the first three weeks of April, IMD has recorded heat wave conditions in 10 Indian states, mostly in central, northern and north western India. The heat first struck Gujarat, Maharashtra and Odisha. It then spread to Madhya Pradesh, Rajasthan, Chhattisgarh and Haryana. The latest states to have heated up abnormally are Uttar Pradesh, Himachal Pradesh and Delhi.

Though a part of this heat can be blamed on the prevailing weak El Nino conditions, there is a role of green house gas emissions as well.

In a research paper published in August 2018, scientists at the University of Southampton had stated that the years between 2018 and 2022 will be hotter than normal. The study published in the journal Nature uses a new technique to estimate the temperature fluctuations arising from the global warming caused by GHG emissions.

The scientists explain that in the early part of the 21st century, the heating due to greenhouse gas emissions had eased as it is not linear in nature. But now the trend has reversed which might make the next few years much hotter than expected, increasing the probability of the occurrence of intense heat waves. The starting of 2019 might just be the beginning.