Climate change is altering the hibernation periods of animals, disturbing their breeding patterns and metabolism 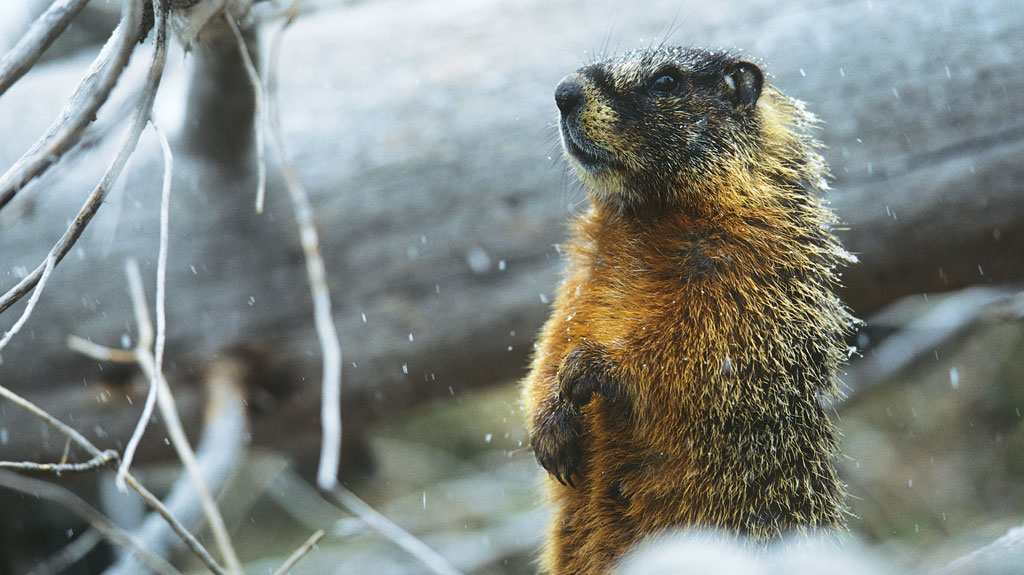 Yellow-bellied marmots, which used to hibernate for seven to eight months in a year, are now coming out of hibernation at least a month earlier than normal (Photo: THINKSTOCKPHOTO)

In October and November last year, attacks by bears outnumbered the attacks by leopards in Pauri, Tehri, Joshimath and Chamoli districts of Uttarakhand. While initially the cause was attributed to habitat loss and deficiency in food, a closer look by Uttarakhand’s forest department officials brought out a startling revelation: the bears were not hibernating as they normally would, and thus were becoming increasingly aggressive. Hiber-nation is an adaptation process among many animals that helps them conserve energy, and also to survive long periods when food is scarce. “The Himalayan brown bear, which would normally go into hibernation right through the winter, is no longer doing so. While some are active for a couple of winter months, there are even those that stay active throughout the winter. There are several reasons for this, and climate change is a primary reason,” says Uttarakhand’s chief wildlife warden, D V S Khati.

Asiatic bears in Kashmir, which used to hibernate from November to March, now hardly hibernate. “If there is a less harsh winter, bears prefer to roam in the woods and nearby human habitations in search of food,” says S Sathyakumar, scientist at the Wildlife Insitiute of India (WII), who has conducted a study on bears in Kashmir.

From amphibians in southern Africa and reptiles in India to mammals in Colorado and even polar bears in the Arctic, the animal world is experiencing drastic changes in its hibernation patterns due to climate change (see `Breaking life cycles', p48). This is leading to a range of impacts, including aggressive behaviour, breeding problems and even changes in their body metabolism. What’s more worrying is that these changes could affect other species within their communities, and mess up the entire ecosystem.

A worldwide pattern is emerging. While some animals have completely stopped hibernating, others have reduced their hibernation period. Polar bears in the Arctic, for instance, have been affected due to extended summers. “If this trend continues as predicted, their population could be in serious jeopardy. Polar bears use their sea ice habitat to hunt their main prey, seals. As the sea ice melts at a faster pace, polar bears have less chance to build up the necessary body weight to emerge out and hibernate,” says Geoff York, a polar bear expert with the World Wide Fund for Nature (WWF).

This is especially true for pregnant females. The survival of cubs during pregnancy and infancy is closely linked to the amount of energy pregnant females have stored up before denning during the winter months, adds York. 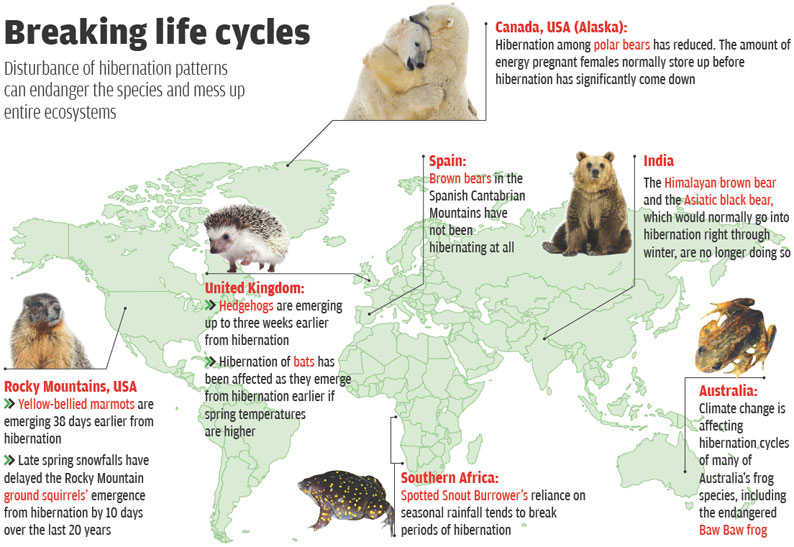 The yellow-bellied marmots, which used to hibernate for seven to eight months in a year, are now coming out of hibernation at least a month earlier than normal, say researchers at the Rocky Mountain Biological Laboratory in Colorado, who tracked the mammal’s behaviour over a 40-year period. “While earlier they used to appear in the second week of May, they are now appearing in the second week of April. They rely on air temperature as a wake-up call and with the temperature warming sooner, they are out early,” explains ethologist and conservation biologist, Daniel T Blumstein.

However, the temperature is not warm enough to thaw the snow off the grass and other plants that are fodder to the marmots, and they wake up to find the meadows still frozen. With a dense snowpack, they either starve or are eaten up by predators, adds Blumstein. In Spain’s northern Cantabrian Mountains, European brown bears have stopped hibernating altogether.

While extensive studies have been done on hibernating mammals, the keynote indicator of the effects of climate change on hibernation patterns are the amphibians, says Anil Kumar Khaire, president, Indian Herpetological Society. For instance, the Spotted Snout Burrower (Hemisus guttatus) is suffering due to a rise in global temperatures, says the International Union for Conservation of Nature’s study, Wildlife in a Changing World. “The species’ reliance on seasonal rainfall events to break periods of hibernation makes it particularly vulnerable to the negative impacts due to climate change,” says the study.

Khaire adds, “Amphibians are especially sensitive to climatic change because they are ectotherms (animals whose body temperature varies with the temperature of its surroundings). It has been noticed that changes in temperature are influencing amphibian behaviour, including those related to breeding and reproduction.” Since most temperate amphibians spend a large portion of the year inactive in hibernation, subtle increases in temperature or moisture trigger them to emerge from their winter nap.

Experts say as soon as amphibians emerge from hibernation, they migrate to nearby ponds or streams to breed. “Thus, global warming creates a trend towards early breeding as average temperatures are increasing. A number of studies also reveal that increasing length of dry periods or overall decrease in annual precipitation may cause the decline and probable extinction of several species of amphibians,” says Stein Joar Hegland, researcher at Sogn og Fjor-dane University College, Norway.

“Changes in ambient temperature on a global scale could disrupt timing of breeding, periods of hibernation, and ability to find food. Because amphibians are key components of many ecosystems, changes in their populations could affect other species within their communities, such as their predators and prey, even if these species were unaffected directly by global warming,” says Andrew R Blaustein, who heads the department of zoology in Oregon State Uni-versity, USA.

Reptiles have not been spared either. Observations on snakes in India show they are now emerging out of their hibernation sooner. “Just before hibernation (from September to November), the fat content in the body of reptiles, especially snakes, increases, and during hibernation (from December to February), the fat content is reduced to half as a result of increase in the level of thyroid in the body,” explains Kaushik Deuti, a scientist at the Zoological Survey of India (ZSI), who has been studying the behavioural patterns of snakes.

When reptiles come out earlier from hibernation, they have less loss of fat in the body, but will have greater decalcified bones with increased calcium and magnesium in the blood. “Moreover, they are unlikely to get enough food resources soon after hibernation because in tropical countries like India, the food supply increases only with the onset of the monsoon. However, we do not have enough data on how this has affected their numbers,” adds Deuti.

Even arthropods such as bees are facing the heat. A 17-year study in Colorado by scientists from the University of Toronto shows that climate change is affecting pollination by disrupting the synchronised timing of flower opening and the emergence of bees from hibernation. “Climate-driven changes in the timing when flowers bloom and the timing when the bees emerge from hibernation is an important factor,” says James D Thomson, professor of ecology and evolutionary biology at the University of Toronto, who authored the study.

Early in the year, when bumble bee queens are still hibernating, the fruiting rates are especially low. This is sobering because it suggests that pollination is vulnerable even in a relatively pristine environment that is free of pesticides and human disturbance but still subject to climate change, says Thomson. He adds that the results are a warning sign that this phenomenon may be widespread.

While emerging research is validating the fact that hibernation behaviour is changing, India lacks research on this. “We have not collected data to map a trend of hibernation pattern changes owing to climate change,” points out Dhananjay Mohan, chief conservator of forests, Uttarakhand. Agrees Kailash Chandra, director-in-charge of ZSI: “We have only begun to research on these lines.”

In October this year, the WII embarked on a research study to understand the impact of climate change on wildlife and devise strategies to reduce its effects on various species found in 12 states-Jammu and Kashmir, Himachal Pradesh, Uttarakhand, Sikkim, Arunachal Pradesh, Nagaland, Ma-nipur, Mizoram, Tripura, Meghalaya, Ass-am and West Bengal. The findings of the study are expected to be released around mid-2016.