Why weather now means business and how it affects you

Early this year, when information and technology behemoth IBM announced that its Weather Company had created a powerful new global weather forecasting system, it evoked hope and fear at the same time.

The company claimed that its new Global High-Resolution Atmospheric Fore-casting System, or GRAF, would provide the “most accurate local weather forecasts ever seen worldwide” and could predict something as small as thunderstorms or as fickle as tropical cyclones that keep meteorologists on their toes till making the landfall.

Every day at Weather Co’s office in Brookhaven, in the US state of Georgia, some 600 meteorologists, data analysts and a supercomputer analyse weather-related information gathered by governments and intergovernmental agencies through their weather stations, sophisticated radars, aeroplanes and spy satellites, and feed those into GRAF.

To ensure that the forecasts reflect localised and near-real-time atmospheric, land and oceanic conditions, the team also harnesses data from some 270,000 personal weather stations (PWS) run by weather enthusiasts across the world and from hundreds of millions of smartphones, whose “pressure” and “location” sensors keep relaying data even as the user is on the move, talking or taking a nap.

These data are then processed by the artificial intelligence-powered GRAF to issue 12 trillion pieces of forecast information for virtually every 3 sq km patch of the globe on an hourly basis. By comparison, the best available government or inter-governmental models have a resolution of 13 sq km and can update forecasts only once in every six hours.

“The information we generate and distribute consists of observations (real-time and historical), short- and long-term, seasonal and impact-based information, such as how crop yields or power generation will be impacted by weather,” Kevin Petty, director of science and forecast operations at IBM, said.

Such accurate and timely information is precious in a warming world. About 80 per cent of all businesses in the world want and buy weather forecasts to make critical business decisions, especially with regard to risk assessment.

The World Meteorological Organization (WMO) estimates that the annual value accrued from weather services by companies globally is $100 billion. The weather industry itself is worth $7 billion and is growing by 10-15 per cent every year.

Though IBM plans to launch GRAF towards the end of the year, it is already selling weather forecasts churned out by the Weather Coto a range of companies that include Google, Apple, Facebook, television stations around the world, insurance companies, and travel and tourism agencies. 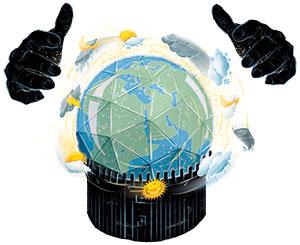 But its increasing prowess is disturbing at a time when there is a push from several quarters to fundamentally change the way the world gathers and disseminates meteorological data.

WMO, which has so far ensured that weather data generated through public agencies is shared for greater public good and for free, now wants private ventures to play a major role in weather forecasts.

In June this year, for the first time WMO rolled out its open consultative process to debate the roles of private players in weather data management.

Speaking at the WMO congress, Louis Uccellini, director of the US National Weather Service (NWS), said: “The demand pie for what we do is getting bigger. There is no way the public sector can supply all the information needed for sectors including energy, agriculture, recreation, transport or health.”

The US government, whose National Oceanic and Atmospheric Administration (NOAA) is the world’s largest weather and climate data provider, also appears to be pushing for an increased role of private players in the management of weather data.

Earlier this year, when Uccellini was contesting for the presidential post of WMO, he was backed by US President Donald Trump. For the past three years, Trump has also been trying to appoint Barry Myers, former CEO of private weather forecasting agency AccuWeather, as the head of NOAA.

Though Myers is not a scientist, Trump has nominated him for the post thrice since 2017. The US Senate has rejected him twice, and after the third nomination Barry is waiting for the Senate to give its approval.

Myers is known for his publicly stated stand that people should pay for weather information, just the way his company’s products are being paid for. Scientists and administrators in the US, especially at NOAA, say Myers’ appointment would lead to a dilution of the scientific rigour of NOAA and its associated agencies like NWS, whose climate research work goes far beyond forecasting.

Myers may have stepped down as AccuWeather’s CEO, but his family continues to own and run the company. Besides, for the past 60 years, AccuWeather has competed with NWS, trying to undermine its work. For instance, in 2005, AccuWeather tried to push for a piece of legislation in the US Senate through Republican Senator Rick Santorum that would have restrained NWS from publis hing weather forecasts, which would then be issued by private agencies.

This would have limited NWS’ scope of work to only predicting extreme weather events like hurricanes and snowstorms. The fear is if Myers becomes the administrator of NOAA, then NWS will become a subsidiary arm of AccuWeather, which would use NWS infrastructure and resources to churn out profits.

This would not only set a prece dent, but also have a cascading effect on other countries. If Myers gets appointed as NOAA’s head, it may kickstart a process to privatise the weather data industry. This will force every other agency, such as the European Space Agency (ESA) or the India Meteorological Department (IMD), to pay NOAA and other organisations for using their weather-related data or near-real-time satellite data that are now available for free.

With weather data under private parties, the consequent financial burden on countries would force governments and authorities to charge citizens for weather information. This would have a disastrous impact on those who are vulnerable to extreme weather events in the world that is fast warming up.

“You find yourself in a scenario where the best forecast on the planet is actually for purchase, and you’re separating the haves and have-nots when it comes to life and property,” said Neil Jacobs, acting administrator of NOAA.

Jacobs’ views highlight a grave concern that is now bothering many — whether private companies should be allowed to control a resource that was always meant to be free and issued by governments in public interest.

Part 2: The weather paywall: Will a free public service be corrupted