US move to repeal Clean Power Plan proves that naming and shaming has not worked, nor are the statements to stand united on Paris Agreements enough 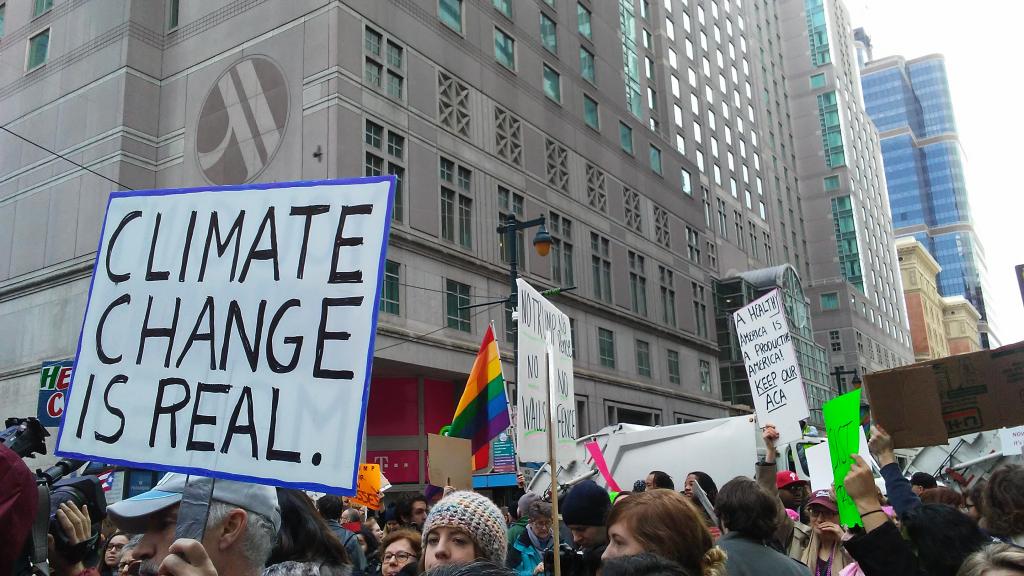 Backlashes and protests by civil society groups and activists erupted after the US pullout from the Paris Agreement. Credit: Wikimedia Commons

The latest move by the Donald Trump administration to repeal Clean Power Plan (CPP), reckoned as the major instrument to cut emissions of the single largest source—US power plants—is only one of the many regressive steps adopted by the US administration. This is in line with its Executive Order, ‘Promoting Energy Independence and Economic Growth’ which largely serves to put fossil fuel back on the US economic agenda. CPP was intended to cut emissions from US power plants by 32 per cent by 2030, and move to cleaner sources of energy; its repeal would further encourage the growth of the fossil fuel sector in the US.

Against the backdrop of the Executive Order designed to repeal, revoke, revamp any action that can potentially burden the development of domestic energy resources, the US is aggressively taking climate regressive steps to subsidise its fossil fuel industry and protect redundant coal plants at the cost of clean energy sources. And this is when the US itself has been affected severely by nine hurricanes and about 76 large wildfires this year alone and the total economic loss to the country has been estimated at US$ 300 billion.

The federal actions also clearly jeopardise the sub-state and city-level campaigns and actions to curb climate change, which includes proposals to become 100 per cent renewable states, setting emission reduction targets, linking of domestic carbon markets and so forth.

US pullout of Paris Agreement

When Trump threatened to pull the US out of the Paris Agreement, the landmark collective deal adopted in 2015 to restrict global average temperatures below safer levels, many political leaders and civil society groups anticipated that the US would succumb to international pressure and decide to stay on in the Agreement. That did not happen. The US did pull out of the Agreement—the second time in the history of climate regime—calling it unfair and shifting the burden to India and China.

Besides backlashes and protests by civil society groups and activists, political statements were made and press releases were issued against the US pullout, followed by assurances that the US would be made to pay the price in diplomatic ways. That also did not happen. Some symbolic gestures followed. The G-20 countries upheld the goals of the Paris Agreement and their commitment to achieving it. The 9th Africa Carbon Forum (ACF) was held where key public and private sector stakeholders and other non-party actors from Africa and beyond discussed climate change mitigation. In bilateral meetings, too, including EU-India strategic partnership, both the entities assured full cooperation to meet the climate commitments under Paris Agreement.

At the G-20 Summit, German Chancellor Angela Merkel and UK Prime Minister Theresa May reportedly urged the US President to rejoin the Paris Agreement but to no affect. Clearly, political instruments like diplomacy and alliance formation have not worked in bringing the US in line with the larger climate goals.

More unfortunate has been the accommodative and rather 'soft' attitude of the leaders to Trump and his administration. Along the lines of G-20 Summit, Theresa May and Trump hailed their 'very special relationship' and were keen on finalising the trade pact between the two countries. Similarly, French President Macron, while ‘warmly’ welcoming Trump, made it clear that the relations between the two countries would not be hampered because of US pullout.

Trump’s antagonism on climate change has turned out to have at least three major repercussions: Trump has been branded irresponsible for not standing up to the need of addressing climate change despite the US being the largest contributor. Secondly, even though, it was thought that city-level and sub-national actions should be the new focus of climate agenda, the federal-level actions have greatly undermined those actions and positive mood as well. Thirdly, and most importantly, the US has set a bad precedence to other countries by making it clear that it is not necessary to fulfill even the domestic climate targets.

Trump has hinted at being open to re-negotiation of Paris Agreement to secure American interests. This has invited questions and suspicions as to how the US would behave from now on in climate negotiations as it would still remain part of the official negotiations for three years, as per the process.

With Paris Agreement being voluntary in nature and lacking strong compliance mechanisms, the question of how to deal with rogue players such as the US becomes a crucial one. The world cannot continue to stay hostage to US’ irresponsible actions. It is important to check its regressive steps and enable it to join in the global efforts to cut emissions and switch to cleaner energy sources. The nature of climate diplomacy does not warrant coercive diplomacy, but imposing restrictions in select sectors could be one option. Diplomatic isolation of such players is definitely needed to send a loud and clear message on the need for adopting ambitious climate actions and deter other countries from following the US policy.

The lead climate negotiator from Fiji has demanded a strong political statement in the UN Climate Change Conference in Bonn this November. It reflects political will, but it cannot be restricted to that. A collective strategy to respond to and deal with the US is the need of the hour.