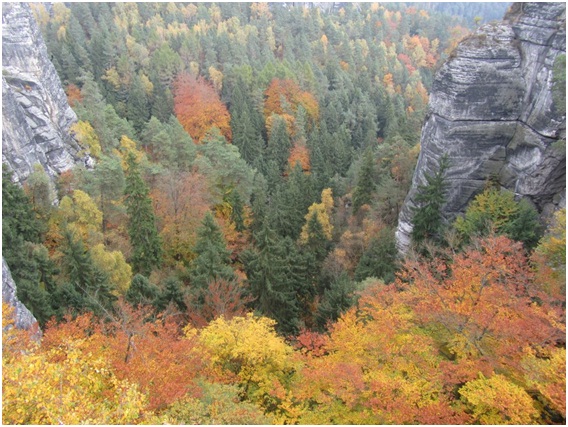 Global conservation efforts appear to be having a positive impact on the planet’s forests. A report released by Food and Agriculture Organization (FAO) on September 7, 2015, states that the net global deforestation rate has slowed down by more than 50 per cent over the past 25 years.

Titled “Global Forest Resources Assessment (FRA) Report 2015”, it is said to be FAO’s most comprehensive forest review to date. It covers 234 countries and territories and was presented at the World Forestry Congress being held in Durban, South Africa.

The report observes that an increasing number of forest areas are now protected as more countries are adopting better forest management practices. Countries have managed to achieve this success by enacting forest laws and monitoring forest resources with greater involvement of local communities in forest planning and forest policy development.

Though the rate of deforestation is decreasing, the report states that around 129 million hectares of forests—an area almost equal to the size of South Africa—have been lost since 1990.

The assessment is based on two data sources—country reports submitted by various national correspondents and forest area assessment with remote sensing conducted by FAO with national focal points and regional partners.

FAO Director-General José Graziano da Silva, while launching the report in Durban, noted an “encouraging tendency towards a reduction in rates of deforestation and carbon emissions from forests”. He said, “The direction of change is positive, but we need to do better. We will not succeed in reducing the impact of climate change and promoting sustainable development if we do not preserve our forests and sustainably use the many resources they offer us.”

Africa and South America are the biggest losers

In terms of deforestation rates, the biggest forest losses occurred in the tropics. Africa and South America had the highest net annual loss of forests from 2010 to 2015, with 2.8 million and 2 million ha per annum respectively. However, the report mentions a decrease in forest loss rates in these areas in the past five years.

Since 1990, most deforestation has taken place in the tropics. In contrast, net forest area of temperate countries has increased. There has been relatively little change in the boreal and subtropical regions.

Given the global population growth, average per capita forest area has predominantly declined per person in the tropics and subtropics, but also in all other climatic regions except the temperate region.

Kenneth MacDicken, leader of FAO's Global Forest Resources Assessment Team, said, “The management of forests has improved dramatically over the last 25 years. This includes planning, knowledge sharing, legislation, policies—a whole range of important steps that countries have implemented or are implementing.” He emphasised how since 1990, the designation of additional forest land for conservation increased by some 150 million ha and that forests in protected areas have increased by over 200 million ha.

Forests are vital habitats for terrestrial biological diversity. They are home to more than 50 per cent of terrestrial species of animals, plants and insects. The FAO report warns that despite conservation efforts, the threat to biodiversity continues and is likely to continue with deforestation and forest degradation. This loss is further aggravated by reduction in tree biomass density due to human and natural causes such as logging, fire, diseases, pollution and climate change.

Presently, forest areas which are primarily designated for biodiversity conservation account for 13 per cent of the global forest area, or 524 million ha. The largest extent of such areas has been reported in Brazil and the United States. Since 1990, 150 million ha of forest have been added to the conservation category. Forests designated for the protection of soil and water represent 25 per cent of the total forest area.

Reduced forest stocking (density) is less visible but it is an important reality in many parts of the world. Over the past 25 years, global carbon stocks in forest biomass decreased by almost 17.4 gigatonnes (Gt). This reduction was mainly driven by conversion to other land uses and forest degradation.

India fares well in the assessment

India came tenth in terms of forest area with its 70,682 million ha of forests. India is eighth on the list of countries with the greatest annual forest area gains with 178,000 ha of forest gains annually during the last five years. The country is expected to gain in forest area by 2030.

But India also records the highest wood removal in the world with 434,766 thousand cubic metres in 2011, given the high fuel wood dependency of India’s population.

As revealed in the FAO FRA 2015, the world’s forests have changed dynamically over the past 25 years. Countries now have more knowledge of their forest resources and we have a better picture of global forest change. The rate of forest area loss is declining and the indicators of sustainable forest management reveal positive progress.

At the same time, important challenges such as deforestation, biodiversity loss and forest degradation remain. Policies, legislation and regulation must be coupled with effective enforcement and incentives for forest conservation and sustainable use. Unsustainable forest practices and forest conversions continue to haunt this sector and the benefits from forest utilisation are not realised by local forest-dependent communities in many countries like India.