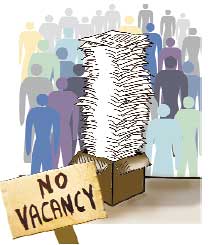 as the Centre scans through curriculum vitae of retired bureaucrats to select the new chief information commissioner (cic), a group of rti activists have sent a legal notice to the government seeking transparency in the selection process. They have asked the government not to appoint the new cic till rules for the selection are in place. They are also demanding that government should consider non-bureaucrats for the posts of cic and information commissioners.

At present, retired bureaucrats generally hold the posts of information commissioners. The Right to Information Act (rti) of 2005 does not talk of advertising and shortlisting candidates before appointment.At the central level, the selection committee for the post of cic comprises the prime minister, the leader of opposition and the Union law minister. Hence, under the rti Act, the authorities are obliged to publish relevant facts associated with the selection procedure, stated the legal notice. We want the government to comply with its own mandatory disclosure provision as per the rti A ct and frame rules for transparent selection, said Krishnaraj Rao, an rti activist from Mumbai. The rules should have been framed within 120 days of the enactment of the rti law, he added.