CO2 emissions in ASEAN from transport sector will double by 2050, warns energy agency 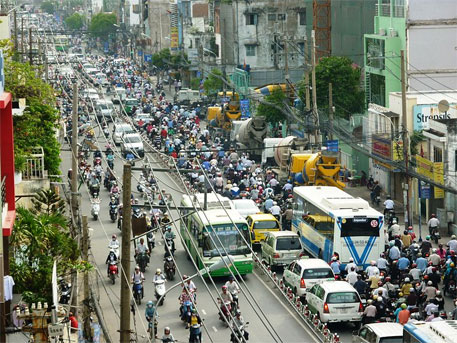 The IEA report, ‘A Study of Long-Term Transport Action Plan for ASEAN’, published in April this year, aims to provide traffic policy recommendations for carbon emissions reduction from transport in ASEAN in 2050 to the defined target value of 0.33 tonnes per capita.

According to the Intergovernmental Panel on Climate Change (IPCC), there is a need to reduce greenhouse gas emissions to half of the current level or by 80 per cent, depending on scenarios, by 2050 in order to stabilise our climate—to limit the future rise in temperature to 2°C or less (read latest IPCC report) .

The report points out that since the population and economy of these countries are expected to grow in future, traffic will also steadily rise and become one of the major problems in Asia. This makes it imperative to take mitigation measures from now on in order to reduce carbon emissions and, thus, global warming by 2050.

The study analysed the transport sector of each of these ASEAN countries and produced individual country reports. The analysis also included societal factors and development priorities in order to identify appropriate policy packages for each country. The report suggests that the policies to reduce carbon dioxide from transport in these countries will be evaluated and introduced every five years. A major shift to cleaner fuels and introduction of more public transport in place of private motorised vehicles is recommended as a step that almost every country should take in order to reduce carbon emissions from the transport sector.

The study recommends that there is a need for behavioural change of people in ASEAN region in order to reduce CO2 emissions. There is a need to introduce improved high quality public and non-motorised transport using new technology. A multi-stage, multi-sectoral cooperation is required where focus is shifted from primary to secondary and tertiary cities as these will be the main areas of growth leading up to 2050. Freight and inter-urban travel should be given more attention. A large portion of CO2 emission is due to inter-urban travel, especially with the increasing use of trucks and cargo trailers, but there are at present few policy options for such means of transport. The report, therefore, stresses on developing policies to reduce CO2 emissions.

Report: A study of long-term transport action plan for ASEAN