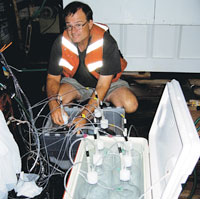 IN WHAT could have ramifications on the ocean food web, scientists have found that rising acidity of seawaters slows down marine nitrogen cycle.

Ocean acidification is the result of CO2 dissolving in seawater and lowering its pH. Scientists know that a drop in ocean pH affects carbon cycle, reducing carbonate ions that corals use to build shells. Now a study has shown that CO2- induced increase in acidity disrupts aquatic nitrification rate. The finding was published in the December 21 issue of PNAS. The nitrification process is central to nitrogen cycle in which marine microrganisms convert one form of nitrogen—ammonium —into nitrate, a form other aquatic organisms require.

Marine biologist Michael Beman, from University of California and his team collected five seawater samples from Atlantic and Pacific oceans from depths ranging from 45m to 240m. They modified the pH from 8.09-7.99 to 7.99-7.85—either by mixing CO2 through the bottles or adding dilute acid.