The total installed capacity of the power sector in India is around 128,000 mw. Thermal power plants--using coal, gas or oil--together account for more than 65.6 per cent of the total power capacity in the country

Historically, the Indian power sector has been dominated by coal as the predominant fuel source of power, accounting for 82.45 per cent of the installed capacity followed by gas (16.12 per cent) and oil (1.43 per cent)

India has emerged as the fifth largest power market in the world. It ranked eighth in the last decade

The installed capacity in the sector has increased by more than 70 times from 1,713 mw in 1950 to 128,000 mw in 2007. The National Thermal Power Corporation is India's largest thermal power generating company 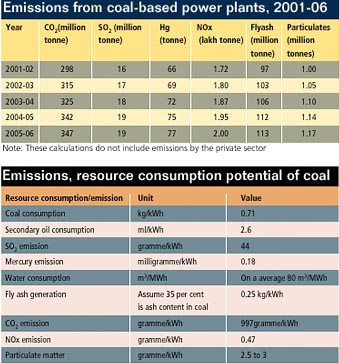 According to the power ministry, by 2012, the projected installed capacity of power will be around 207,000 mw, of which around 69 per cent will be contributed by thermal power plants, followed by hydropower (26 per cent) and nuclear (5 per cent). The ministry has also indicated it will double the capacity every 10 years

Indian thermal power plants consume on an average 80 cubic metre (m) of water for every mw-hour (mwh), while the global best practice is just 10 cubic m/mwh

Except for particulate emissions, there are no formal standards for SO2, NOx and mercury emissions in coal-based power plants