The Indian Coast Guard has filed an initial multi-crore claim for its role in mopping up thousands of tonnes of oil spilt off Groat Nicobar Island in January. 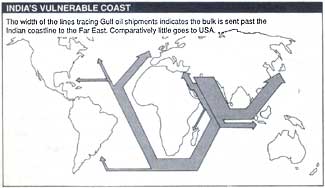 AFTER the action comes the bill. The Indian Coast Guard (ICG) has filed an initial claim of Rs 13 crore for its role in cleaning up about 40,000 tonnes of oil spilt in the Andaman Sea on January 21. The spill occurred when the Danish oil tanker, Maersk Navigator, collided with an empty Japanese tanker, 122 kin southeast of Great Nicobar Island.

The Union ministry of environment and forests (MEF) has still to file its claim for environmental damage, as also the National Institute of Oceanography (NIO), for deploying its research vessel Sagar Konya, and the Andaman aild Nicobar administration, for fishing losses and coastal damages. Their claims will be filed only'after detailed assessments from NIO are received in May.

MEF officials estimate initial claims could be as much as Rs 20 crore for the clean-up operation and for deploying Sagar Konya to conduct a preliminary environmental impact study. The vessel will make another trip to the islands in April to make a final damage assessment. MEF officials are reluctant to estimate how much the final claim would amount to, as "this may bias the insurance company regarding the payment of compensation".

ICG used two ships and two air-craft to spray chemical dispersants over a week to break up the oil spill. ICG's claim only-covers the cost of tackling the spill and not its environmental implications. Hence, ICG's Rs 13-crore claim should be considered c1rily as the first tranche of compensailon claims, cautions a senior ICG offcial.

Under maritime law, Indian agencies bove upto three years to file compensation,claims with Maersk Navigator's owners, A P Moller Singap re (Pte) Ltd. As India is a signapore to the International Maritime Pollution Convention, it is eligible for payment from the tanker's insurer of up a maximum of Rs 53.73 crore. Theoretically, the legal maximum available in oil spill cases is Rs 246.27 crore, but Joe Nichols, technical manager for International Tanker Owners Pollution Federation - a London-based organisation that advises tanker owners, insurers and the International Oil Pollution Fund - says, "I don't think more than the shipowner's limit will be claimed. There was virtually no clean-up required." (See Down To Earth, February 28, 1993)

While Nichols' statement reflects an understandable bias in the matter of claim payments, Indian authorities are chary about giving out details of the compensation amounts they intend to seek. The outcome of India's damage claims is extremely important for as much as half of the oil shipped from the Middle East goes to Asian and Australasian ports past the Indian coastline. And because of the Asian economic boom, this quantity will grow rapidly.