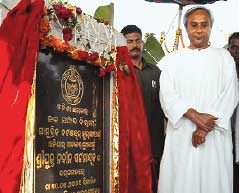 Geo-tubes not for the long term

ORISSA Chief Minister Naveen Patnaik laid the foundation stone for a 700-m long seawall using geo-tubes in Pentha village in Kendrapara district on January 30. It will cost Rs 15 crore (see 'Bureaucracy on the beach', Down To Earth, September 16-30, 2008).

"Geo-tubes are better than stone boulders to prevent beach erosion," said Bhagirath Behera, Orissa's director of environment. Geo-tubes are tubes made from synthetic fabric that are filled with sand and clad in stone.

Naturalists don't think geo-tube walls are the long-term solution. "They can only be a temporary anti-erosion measure," said Subhranshu Bhushan Ray of the Geological Survey of India, Bhubaneswar. He said the wall may deflect waves but the beach would get eroded elsewhere. An in-depth study of the wave character in the Pentha area is required before the government executes the expensive project, said Ray. The environment department will have to act fast as Orissa's Satabhaya coast is eroding by 85 metres every year.