The eriophyid mite has a field day, while officials sleep tight. The pest attack was first reported in 2000, when a farmer from the Puri district became quizzical about a white powder sprinkled around his trees 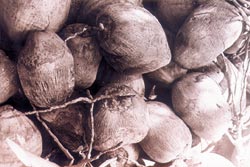 dibyaranjan Dash, a farmer of the Puri district of Orissa, has a forlorn look on his face as he mutely watches the basis of his endurance fade into extinction. A killer has been let loose in his fields and it is ruthlessly devouring all the coconuts -- the lifeline of Orissa's coastal economy after the super cyclone of 1999. About 50,000 farmers face the same fate as Dash, with the eriophyid mite affecting around a million coconut trees of the state and the bureaucracy choosing to downplay the assault for the past three years. Fed up of the lackadaisical approach, the Orissa Coconut Farmers Federation (ocff) has recently issued a memorandum to the state's chief minister, warning of dire consequences if the government fails to sort out its misplaced priorities.

The pest attack was first reported in 2000, when a farmer from the Puri district became quizzical about a white powder sprinkled around his trees. He approached the local office of the Kochi-based Coconut Development Board (cdb). A few days later, after much scrutiny, cdb officials declared that the white powder was nothing more than colonies of a small mite. A June 2001 survey of cdb, conducted in collaboration with the directorate of horticulture, Orissa, however opened everyone's eyes: the small mite indeed had huge impacts. "We found that it had infested 10 to 36 per cent of the trees in nine coastal districts, with Puri being the worst hit," says Sudarshan Panda, deputy director of the directorate. Dash and other farmers apprehend that at least 40 per cent of the trees may be infested this year. With the mite rapidly spreading, local people have started calling it jadu poka (magic pest) or the coconut cancer.

The pest has affected the size as well as the quality of the coconuts, as a result of which their prices have come down. "The farmers may suffer a loss of Rs 20,000 to Rs 40,000 this year," says Biswanath Mishra, president of ocff. Moreover, before the attack, Orissa produced about 240 million coconuts per year from about 38,000 hectares of land (6,315 nuts per hectare). Now, the yield is 5,716 nuts per hectare.

Experts ponder over the reasons for the sudden emergence of the disease in the area. S K Mitra, an official of the Chhattisgarh-based Central Integrated Pest Management Centre says: "Changes in climatic conditions due to increased cyclonic activity may be one of the reasons." "After the super cyclone, many non-governmental organisations and farmers had bought infected seedlings from places like Kerala and Andhra Pradesh," adds Panda.

Kerala, Tamil Nadu and Karnataka are facing the maximum wrath of eriophyid . It has, in particular, broken the backbone of Kerala's fragile economy, since it started its devastating tour in 1998. The state, which accounts for 40 per cent of India's coconut produce (6,000 million nuts, with a productivity of about 5,775 nuts per hectare), was the first one to be affected in the country. "We were struggling to find a solution for the devastating coconut 'root wilt' disease, when mandari (the local name of the mite) attacked," says K M Thomas, a coconut farmer of the Alapuuzha district. Today, the pest attack had assumed epidemic proportions in eight districts. A recent study of Kerala Agricultural University (kau) indicates that 90 per cent of the state's trees are damaged. However, the state agriculture department puts the percentage at 42.

"The assault is a big blow to the country's coconut oil sector, since the state supplies nearly 90 per cent of the copra," says D Keshav, a researcher of cdb. The price of coconut oil in the domestic market has already increased from Rs 34,500 per tonne in 1999 to Rs 52,000 in 2003. The disease has also hit coir exports since the pest damages the husk, from which coir is made. There were rumours that a mutant variety of the mite was developed specifically for Kerala's climate and released to destroy the state's prominent position in the export market.

With each passing day, new theories are being propagated, but no one has come up with concrete solutions. The Union government has sanctioned Rs 160,000 to combat the problem in Orissa, but the funds lie idle. "Solutions have to be evolved by organisations like the Orissa Agro Industries and Markfed, which lack any kind of expertise. We thought of buying 'preventives' from a private firm but rules do not allow us to do so. Moreover, since using chemicals may poison the trees, we are searching for botanical ways," admits Panda.

Even in Kerala, agricultural scientists are debating about the preventive measures. An expert committee of kau and the Central Plantation Crops Research Institute had recommended spraying of pesticides such as monocrotophos and dicofo. But these are non-biodegradable and toxic. The farmers have also been advised to use a mixture of garlic, neem oil and soap. K C John of the Zoology Research Centre, Kottayam, says diluted rubber latex is very effective, as it covers the nut till the mite dies. Since these solutions are inconclusive, the farmers will have to wait and watch huge tracts of their coconuts succumb to the tiny mite.