Come without your car 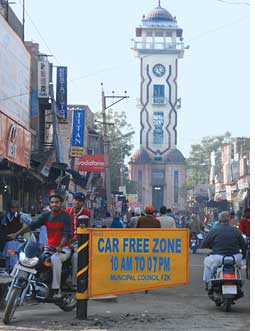 Fazilka is a small, 162 year-old town on the India-Pakistan border in Ferozepur district. Its unkempt, garbage-strewn congested streets with small, bustling shops are nothing out of the ordinary. But this town of about 68,000 people--and about 45,000 vehicles on its narrow lanes--has removed one source of congestion cars.

From November 21 this year, it has banned the entry of cars in the main market around the Ghanta Ghar (Clock Tower) between 10 am, when most shops open, and 7 pm, when the shopkeepers head home. Two wheelers are allowed, but the town plans to take care of them gradually. This despite opposition to the ban initially, especially from shopkeepers who feared losing clientele.

Fazilka's unusual story began with a festival in 2006.In the last week of March that year, a citizens' group of about 250 people called Graduates Welfare Association Fazilka (gwaf) organized the Fazilka Heritage Festival.For this, a stretch of 300 metres on the Sadhu Ashram Road, not far from the current car-free zone, was converted into a pedestrian street.

The festival was a success, said Bhupender Singh, a retired professor of mechanical engineering studies at iit Roorkee and an architect of this project. "Without cars, there was a lot of road space for everybody. There were stalls selling everything from food to handicrafts and people danced on the streets without the fear of being run over," he added.


The festival was held again next year, though at a different location the Salem Shah East West Corridor, which crosses the Ghanta Ghar, was chosen. This time, the car-free zone extended about a kilometre. The festival went down well with the residents and set the tone for a dedicated car-free zone.

"It is only logical that first the most congested area of the town should be freed from traffic," said Navdeep Asija, project manager of the Punjab Roads and Bridges Development Board, now based in Chandigarh. Asija had been studying the town's traffic problems since 2006. "Fazilka is approximately 10.29 sq km big with each side spanning just a little over three kilometres. It can easily become a pedestrian's city, with motorized vehicles used primarily for transportation of goods."

The stalemate continued till September 2008, when Anil Sethi took over as the president of the municipal committee. A trader himself, Sethi heard gwaf's idea of a car-free zone, got interested, and set about implementing it. He considered such a scheme beneficial to Ghanta Ghar shopkeepers because it would decongest the area. Sethi's clout among the traders helped him convince them.

In the following month Sethi, along with gwaf members, held several meetings with traders and their associations for creating consensus. "It was mainly the wholesellers who were against the scheme. They thought it would obstruct the movement of their goods. But we convinced them," said Sethi.

The Ghanta Ghar market has three roads jutting out of it in three different directions. The lane encircling the Ghanta Ghar is about 200 metres long and is now free of traffic as the three roads have been barricaded. About 800 metres of the road connecting Hotel Bazar in the north to Wool Bazar in the south has been blocked. Another 400 metres of the Salem Shah Road on the east, starting at Sarafan Bazar, has been barricaded. The fourth arm in the west had already been blocked by a temple.


Once apprehensive, the shopkeepers in the Ghanta Ghar market are happy with the ban now. There is no official monitoring of pollution in Fazilka, but shopkeepers claim the air is cleaner. "I used to keep a jug of water for my staff and customers. Before the car ban, I had to change the water every hour as it would turn dirty," said Vicky Chabbra, owner of Fancy Bartan Store, a utensils shop. "Now, it remains in the jug for an entire day and still looks clear." Chabbra said sales in his shop have increased 25 per cent since the ban.

Roshan Lal, who sells chaat a few metres away from the utensils shop, corroborates Chabbra. "People have more time now. They come and enjoy their food without being hassled about whether their cars are blocking the road," Lal said. Vikram Ahuja, owner of Zamindara Farm Solutions, wants the concept replicated in other parts of the town. "Fazilka is a small town; one can easily walk from one corner to the other," he said.

The car-free zone has spurred many an ambitious dream. There are talks of converting the Ghanta Ghar market into a pedestrian mall, with brightly coloured shops selling everything from cotton handkerchiefs to lcd televisions. There are plans to renovate a section of the market and make it an exclusive food court.

Sethi plans to free most of the city of cars eventually. Asija mentioned the next street to be freed of cars about 800 metres of the Bank street running parallel to the north-south street would be brought under regulation.

There is a popular desire to see municipal president Sethi win the world's best mayor award for successfully making a part of the city an eco-healthy zone.