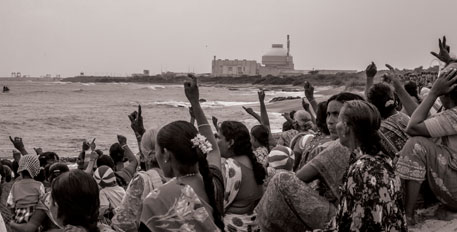 A petition filed in the Madras High Court has challenged the recent order of Atomic Energy Regulatory Board (AERB) for starting the nuclear fission process called ‘criticality’ in the controversial Kudankulam Nuclear Power Project in Tamil Nadu. The petition was filed on July 16, five days after the AERB order.

G Sundararajan, the petitioner, has alleged that the AERB order has violated the Supreme Court judgement passed on May 6, giving a go ahead to the project. “In its judgement the Supreme Court had asked the plant authorities to fulfill 15 directions before starting the plant,” said Sundararajan.  But AERB gave orders to attain criticality on July 11 even before fulfilling those directions, he added. The plant is expected to start power production in a couple of weeks.

The court directions include safety check of all the components of the plant, discharging the hot effluent from the plant through a pipeline of around two km into the sea and a green belt of 25 metres around the plant. But activists claim that the plant is discharging the effluent right on the sea shore and that the green belt is just 6 metre right now.
Officers of AERB were unavailable for comment. Hearing of the petition has been scheduled for July 23.