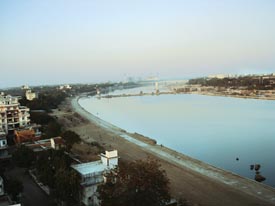 construction on Gujarat's ambitious Sabarmati Riverfront Development Project in Ahmedabad, restarted in the second week of March, 2007. The project had been stalled since August 2006, when heavy floods inundated the city.

Following this, the National Institute of Hydrology (nih) and Indian Institute of Technology (iit), Roorkee, were asked to re-evaluate the project design, in the light of the river's carrying capacity, and see whether the execution of the project would damage the river's ecology. The team submitted its report early March, suggesting two measures a gauge to determine flood levels where the Narmada's main canal crosses the Sabarmati; and dredging upstream of the Vasna barrage, implying a problem with the river's carrying capacity.

The Ahmedabad Municipal Corporation (amc) set up the Sabarmati Riverfront Development Corporation Ltd (srfdcl) in May 1997, "to revivify the city centre by reconnecting it to the river", says DK Mahajan, executive director, srfdcl. That August, amc appointed the Environment Planning Collaborative (epc), an Ahmedabad-based urban planning consultancy firm, to prepare a plan. In the first phase, epc identified a 9-km stretch of the riverfront extending from Subhash bridge to Vasna barrage and proposed to reclaim 162 hectares (ha) of the riverbed (see map Disputed stretch). srfdcl planned to sell or lease out a part of it to finance the project. In 2003, it extended the project to cover a 20-km stretch--from the Narmada main canal to Vasna barrage. "But in 2005, this was put on hold and phase i was extended 1.5 km beyond Subhash bridge to accommodate the Kotarpur waterworks and Duffnala stormwater outfall. As of now, srfdcl is developing 190 ha," says Bimal Patel, an architect-planner of the project. This constant change in the plan has escalated the project cost from Rs 361 crore in 1997 to an estimated Rs 1,100 crore today. An issue that remains unknown is how srfdcl plans to service its debts.
The average width of the Sabarmati channel was 382 metres and the narrowest cross-section 330 metres, noted a rapid environmental impact assessment (eia) report by the Centre for Environmental Planning and Technology (cept), Ahmedabad, and Gujarat Ecological Commission (gec), Vadodara. To develop the riverfront, srfdcl had uniformly narrowed the channel to 275 metres, ensuring this constriction did not affect its carrying capacity, according to officials.

According to them, the peak discharge in the Sabarmati in August 2006 was between 260,000 and 310,000 cusecs. But this had caused floods that washed away hundreds of hutments. Officials claim embankments being built along both the banks will protect the entire reclaimed area, including resettlement sites, from floods. However, accounting for data over the past century, there is no consensus about peak discharge. The irrigation department says it was 550,000 cusec in 1973, while Sheladia Associates and C C Patel and Associates, Ahmedabad-based consultants, put the figure at 400,000 cusec. "Due to unreliable data and contradictory assessments, one is forced to question the project's river hydraulics and flood design," says S Mudrakartha, director, Vikram Sarabhai Centre for Development Interaction, Ahmedabad.But design was just one of the issues that dogged the project. The pollution problem was not addressed. There were apprehensions that while developing the 10.5-km stretch, pollution would be pushed downstream.

Everyday, the Ahmedabad municipality generates 500 million litres of domestic waste. However, according to the city development plan, 25 per cent of the city remains unsewered and 168 mld (million litres daily) of wastewater is released into the river untreated through storm water outfalls. In 1992, Rs 100 crore was allocated under the National River Conservation Plan (nrcp) to tackle this untreated sewage discharge. In the first phase, which was completed in 2005, a combined treatment capacity of 487 mld was set up at a cost of Rs 93.55 crore. Another 100 mld treatment plant and interceptor sewers to channel wastewater downstream of Vasna barrage are proposed for the second phase. However, infrastructure for this shall only be in place by 2011.

Besides, there is industrial wastewater. The city has three common effluent treatment plants (cetps) at Odhav, Naroda and Vatva, which treat most of the cities' industrial waste. These plants are meant to treat 20.2 million litres of industrial effluents a day. However, none of them conform to Gujarat Pollution Control Board (gpcb) norms, says G H Trivedi, environmental engineer, gpcb. With the setting up of a mega-pipeline scheme in 2001, these partially-treated effluents from the cetps were pumped further downstream, where, before spilling into the Sabarmati, they were supposedly diluted with treated domestic waste from the Pirana sewage treatment facility.

In 2006, the mixed cocktail at this outfall averaged a chemical oxygen demand of 1,535 milligram per litres (mg/l), six times the prescribed norm, and a biological oxygen demand of 678.5 mg/l, 22 times the norm. Ghiaspur, a village 1 km downstream of the Pirana outlet, faces the brunt of it. "Industrial and domestic waste has percolated and contaminated our 500-ft deep bore well," says Gandaban Prajapati, a resident of the village. In fact, in the eia report, cept-gec recommended that a project monitoring committee be set up to look into the pollution and design aspects of the project. But its status still remains unknown.

The issue of downstream pollution connects with the question of rehabilitation. Experts believe the riverfront project offers no relief to those who will be displaced. "Of the total reclaimed land, srfdcl plans to sell only 21 per cent for residential and commercial purposes," says Patel, rubbishing these concerns. "The rest of the land will be used to set up promenades, informal markets, gardens and to extend the road network, with 10 per cent to rehabilitate slum dwellers." According to the 1997 epc study, of the estimated 10,000 families living along the riverbank, 4,400 were to be resettled and rehabilitated. In 2003, the Gujarat government transferred land to amc, stipulating that resettlement and rehabilitation was to follow epc recommendations. To update these estimates in August that year, a survey by Swapan Garain of the International Institute for Social Entrepreneurship Management, Mumbai, established that the number of slum households along the riverbank was 14,555, of which 6,293 needed to be rehabilitated.

"No proper census of hutments has been done with the plan grossly under-estimating the present need by at least 10,000 units," says Deepak Babaria from Ahmedabad, who has worked closely with the riverfront dwellers' association for rehabilitation.Project proponents vehemently disagree and say everyone in the project-affected area will be adequately represented. Besides, the plan assures slum dwellers secure tenure, access to roads, infrastructure services and a 2-3 km proximity to their present location, to maintain livelihood sources.

Not everyone buys this. In 2005, Girish Patel, a social activist in Ahmedabad, filed a petition in the Gujarat High Court, arguing that the scheme would in fact disrupt livelihoods. Acting on the petition, on March 8, 2005, the court issued a stay order on eviction and called for policy documents, when formulated, for prior approval.


srfdcl's intention to cash in on the new perennial status of the Sabarmati by keeping water in the course throughout the year in the 10.5 km city stretch also caused apprehensions. The river used to be seasonal, retaining water for two to three months. According to the eia, maintaining a water depth of 1 m at Subhash bridge will require a continuous flow of 108 to 140 mld from October to June. As of now, surplus water in the Narmada main canal is being diverted to ensure this. But given that Sardar Sarovar Narmada Nigam, responsible for Narmada water allocation, has no agreement with srfdcl, Sabarmati's perennial status may be threatened unless amc shells out.

"The ecology of the river is being transformed to satisfy the commercial greed of a select few," says Darshni Mahadevia of cept, reflecting concerns about riverfront 'beautification'.