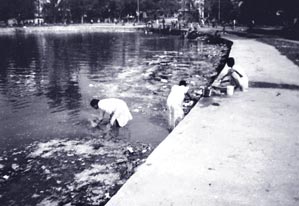 In what seems to be an ecologically unsound measure, the Kolkata Municipal Corporation (KMC) is covering the land around 11 ponds and lakes of the city with concrete. That the project is a part of a beautification and conservation drive makes it starkly incongruous.

Scientists and environmentalists have warned that the initiative could have disastrous consequences. Abhijit Mitra, professor of marine science, Calcutta University, points out: "The absence of natural soil on the banks can adversely affect plankton (microscopic floating organisms) which, in turn, would have a ripple effect on the other aquatic life in these waterbodies. Ponds also purify the environment by absorbing pollutants. But if the land right up to the water's edge is covered with cement, they wouldn't perform this function."

The Friends of Wetlands and Wildlife (FWW), a body comprising various environmental groups, says the move will lead to an increase in the city's temperature and provide a breeding ground for mosquitoes. FWW working president Gitanath Ganguly also alleges that the KMC is not adhering to the guidelines laid down by the Asian Development Bank (ADB), which is funding the venture. According to Mukuta Mukherji, secretary, FWW, the ADB has advocated the creation of a "vegetative boundary" for the waterbodies. The group has threatened to take legal action if the civic body doesn't address the issues raised by it.

But KMC officials refute the charges, claiming that the ADB has not specified that concrete cannot be used. "We are following the ADB's guidelines. The work involves making toe-walls by cementing the portion along the banks. This would check erosion and ensure that the water level doesn't dip," reveals a project official. So far as aquatic ecology is concerned, the official is insouciant: "There are biodiversity zones like the Sunderbans. Kolkata does not come under such a zone."

Hridayananda Gupta, member, mayor-in-council, parks and gardens, is of the view that the step is necessary as the waterbodies are being subjected to pressure from big buildings. But Joy Dasgupta of the National University of Juridical Sciences in Kolkata says: "The best way of protecting the ponds is by keeping them in their natural state." He also charges the KMC with not conducting an environmental impact assessment for the work.