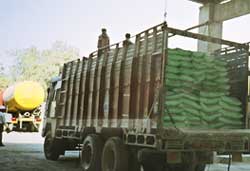 Mumbai, Chennai, Bangalore and a few other cities are facing a cement shortage that has led to a sudden increase in cement prices even though cement production is thriving in the country. The shortages have been caused by a Supreme Court (sc) order, dated November 9, 2005, which cracks down on the practice of overloading of goods trucks and trailers.

The sc had also quashed notifications issued by various state governments allowing overloading of trucks by issuing special gold cards/tokens against a monthly fee, calling them contrary to the Central Motor Vehicle Act, 1988.

The Municipal Corporation of Greater Mumbai is worried that it might not be able to finish ongoing projects such as road concretisation, laying sewerage lines and stormwater drains before the onset of monsoon. On the other hand, Mumbai-based Cement Manufacturers' Association says that cement is lying at railway stations without any means of transport.