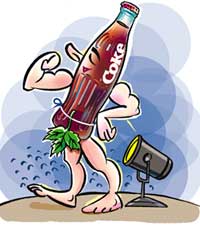 After sullying its image by pumping groundwater from Indian villages, Coca-Cola went in for a public relations exercise: it co-sponsored the 2nd International Groundwater conference (igc), 2006. The School of Environmental Sciences, Jawaharlal Nehru University , played the role of 'scientific establishment' in support. A L Ramanathan, part of the organising committee, argued for Coke: "The conference brought out the need for continuance of such events in order to expand new interdisciplinary areas".

Surely, there were 'scientific' papers singing hosannas for Coca-Cola. Equally surely, they were presented by Coca-Cola employees. One stated how wonderfully Coke recharges 55 per cent of their groundwater withdrawals and has been actively implementing rainwater harvesting structures at 26 plant locations across the country.

But a few independent researchers who had been kept in dark about the sponsors till the last moment went ballistic. Jenny Gronwall of Linkpings University, Sweden, said, "Coca-Cola as one of the conference sponsors came as a bitter surprise to me and to many others, and this was revealed to us as participants only when we arrived at the conference venue."

The participants were told that Coke had paid a mere Rs 1 lakh to get their name displayed, and time for a vip from the American office to deliver a speech during the inauguration session".

D K Biswas, ex-chairman Central Pollution Control Board, seemed empathetic to Coke's 'cause': "A conference is all about spreading awareness and attempting to empower people with viable solutions.