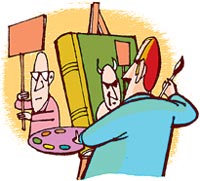 A report on the role of non-governmental organisations (ngos) in present-day society and the future of such bodies ran into trouble even before it could be released. The document was held back when environmental pressure group Greenpeace uk objected to misrepresentation of its stance. It was reprinted after changes were incorporated in the "flawed prcis of their views".

The study -- The 21st Century ngo: In the Market for Change -- is a collaborative venture between SustainAbility, an international consultancy on business strategy and sustainable development, the United Nations Global Compact (ungc) and the United Nations Environment Programme (unep). Its thrust is to gauge the terms of engagement between ngos on the one hand, and businesses and governments on the other -- and how these are likely to change in the future.

"The good news for ngos is that they are emerging as key ingredients in the health and vitality of markets. They are also highly trusted, far more so than business or governments," says John Elkington, SustainAbility's chairperson. "The bad news is that unless they recognise and address growing financial, competitive and accountability pressures, their impact will be significantly reduced. For those that respond intelligently and in time, the prize is to be amongst the most influential institutions of the 21st century," adds Elkington. The report points out how ngos are increasingly moving to modes of operation quite similar to the corporate sector, and how they need to show the same accountability that they demand of businesses in this changing scenario.

With a theme as sensitive as this -- in several places across the world the fight against the influence of multinational corporations is led by ngos -- controversy was, perhaps, inevitable. Stephen Tindale, executive director of Greenpeace uk, says he "objected very strongly to the original report because it contained an extremely inaccurate summary of my views on accountability". Being answerable is indeed vital, but different organisations are accountable in different ways, he asserts. "It is bizarre to suggest that Greenpeace believes organisations like ours do not need to be accountable 'so long as they do not break the law'. Greenpeace has often taken peaceful direct action to challenge bad laws, many of which have changed as a result. ...We accept full responsibility for (our) acts of civil disobedience," states Tindale.