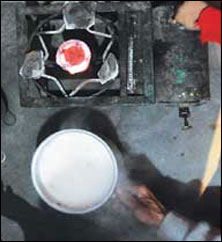 Nepal  has a high incidence of tuberculosis. Nepal is also among the South Asian countries where a lot of biomass is burnt for fuel. The two facts provided a group with reasons to link indoor air pollution from fuels with tuberculosis—something that six studies have so far have tried to do, unsuccessfully.

Researchers from the school of public health at University of California at Berkeley in usa proved the link and also found something significant: kerosene, though not a biomass-based fuel, plays a bigger role in triggering the disease.

The researchers studied 125 women in the age group of 20-65 suffering from tuberculosis and getting treated in the Regional Tuberculosis Centre and Manipal Teaching Hospital, both located in the Pokhara municipality. Another 250 healthy women in the same age group were monitored as control. The women were questioned on history of use of cooking fuels and stoves, kitchen type and location, kitchen ventilation, burning of mosquito coils and incense.


The researchers also visited a small number of households to verify the answers for the study that lasted from July 2005 to April 2007.

Burning wood, cow dung and other such biomass to keep the house warm harms the lungs more than when the same is used for cooking. This could be because cooking on stoves takes a long time. The woman goes into the kitchen once in a while to check if the food’s done, thus reducing her exposure to smoke. Using biomass for heating results in more exposure as there is a deliberate attempt to minimize ventilation as the family sits around the fire. This was not considered earlier as most of the studies on biomass and tuberculosis have been carried out in warmer countries but in Nepal night-time and winter temperatures are low.

The team also found that women who had been exposed to the fumes of burning kerosene both in stoves and for lighting purposes were more prone to catching tuberculosis.

Kerosene is more of a risk than biomass as burning of biomass produces dense smoke that make the eyes smart; so people stay away and avoid inhaling the fumes. But sitting right next to a kerosene lamp or lantern causes far less discomfort while exposing one to fine particulate matter and other lung-damaging chemicals.

“We plan to do a much larger and more detailed study to validate this finding as it would have major implications for policy if confirmed. Poorly burned kerosene is a risk, but to what extent must yet be determined with certainty,” said Kirk R Smith, who led the study.

“For the moment, I think the main policy implication is that along with kerosene fuel subsidies, there should be programmes to promote cleaner burning lamps and stoves,” added Smith. Identification of the risk factors that lead to tuberculosis is essential to reduce the disease burden in Nepal and other developing countries.