Improved stoves will be standardized for fuel and emission efficiency 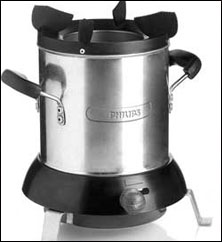 On december 2, the Union ministry for new and renewable energy (mnre)  launched a programme to provide efficient cooking stoves to the rural and urban poor. These stoves burn wood and coal more efficiently and reduce smoke. Their use is expected to improve the health of women and children. Stoves with proven efficiency may also be used in carbon trade.

Apart from popularizing advanced cook stoves, the programme would introduce certification centres where existing cook stoves would be tested for their efficiency. “The earlier programme launched by the central government in the 1980s was about taking efficient cooking stoves to the people; now the focus is on their standardization,” said Priyadarshini Karve, project coordinator of Appropriate Rural Technology Institute, a non-profit in Pune.


Efficiency of stoves is measured by the amount of fuel consumed and emissions.

Standards are crucial if cook stoves are to be used in carbon trade to subsidize their cost to the poor, said experts attending technical consultation on advanced cook stoves organized by usaid on December 10.

(These cook stoves cost Rs 600 to Rs 3,500). In Uganda, for instance, financial service provider JP Morgan showed each cook stove could reduce two to three tonnes of carbon emissions a year. Each tonne is worth US $10 to $15.

A May 2009 report of mnre suggested carbon trade could play a role in promoting improved cook stoves.

The report estimated a 10 per cent improvement in efficiency of cook stoves can save 275 tonnes carbon emissions per 1,000 cook stoves a year, considering the yearly consumption of wood or coal per household is 1,500 kg in a year.

Rakesh Sharma, senior director with Philips Electronics India Ltd, said: “We are keen on carbon trading as a financing mechanism but technology to measure carbon emissions of a cook stove is not available. The government should grade existing products on smoke emission,” he said.