Water body and trees around the building provide cooling effect 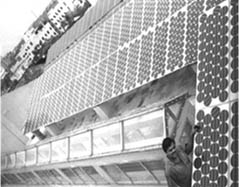 picture this: it is the peak of summer in Kolkata and an office operates normally without any air conditioner, but none of the people inside are sweating (or complaining). West Bengal Renewable Energy Development Agency ( wbreda ) has proved its efficiency in renewable energy once again. Its new office at the Electronic Complex in Salt Lake is the first non-conventional energy agency in India to adopt solar passive architecture.

The four-storied building is aptly termed Bikalpa Shakti Bhavan and runs almost entirely on renewable energy. "We try to utilise renewable energy as much as possible in the building," says S P Gon Chaudhuri, director, wbreda . Chaudhari has been heading the agency since its inception in 1993. The building is planned in such a way that flow of heat into the building is restricted to the minimum. The dense trees on the southern side minimise the summer heat by absorbing radiation. The 18.3 mt high pillars that surround the water body on the same side of the building helps the cool breeze to flow into the entire building.

A grid connected 25 kw solar photovoltaic ( spv ) power plant is placed on the roof-top that helps to partially meet the energy demands of the building. The office requires around 90 kw of electrical power per day, but the trees and the water body help to save 20 kw of energy. Eventually, the building requires only 45 kw from the West Bengal State Electricity Board ( wbseb ). Even this can still be reduced.

"During holidays, the energy requirement of the building is almost nil, but the spv power plant continues to generate energy," says Tapan Kumar Chakraborty, supervisor, electrical. The excess energy is fed into the wbseb 's grid.

A unique system of net metering is involved in which the energy generated by the power plant and the energy consumed by the Bikalpa Shakti Bhavan is recorded. After necessary adjustments are made, the electricity bill is paid. "In case of emergency or load shedding, the power plant can also supply electricity," asserts Chakraborty.

The solar chimney effect is applied in the building. The cool air, being heavier than the warm air remains inside and circulates, while the warm air rises towards the vents and to the ceiling bringing it to the chimney which sucks the hot air out. However, the building is not cold in winter either: "since the trees shed their leaves during this period, radiation is not absorbed, thus allowing heat to enter the building," explains Chaudhari.

The western part of the building that receives maximum sunlight has no windows, but instead, it has two parallel walls with gaps -- cavity walls -- that block the entrance of heat into the building. But this does not make the room dark because there are E-content polycarbonate sheets on the roof that allows light to pass through. This special type of sheet can absorb heat.

The wbreda is one of the forerunners of renewable energy in India and is also the recipient of numerous awards in the field of solar photovoltaic and biogas awarded by the ministry of non-conventional energy sources.