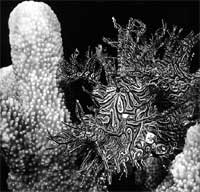 the picturesque islands of Mentawai along the southern coast of Sumatra may be a tourist's delight, but the coral reefs surrounding them tell a story of ecological disaster. Their destruction is suspected to have been caused by the use of explosives and sodium cyanide poison to kill fish in the reefs in order to easily catch them in large quantities.

Several large factory vessels from other countries visit these shores in search of prized catch such as wrasse, groper and cod for the south Asian fish market. While explosives damage specific portions of a reef, cyanide kills the smaller fish as well as the living coral, algae and invertebrates on which the fish depend for survival, thus depriving the local fisherfolk of their main livelihood.

A recent survey by the Indonesian Institute of Sciences has estimated that 58 per cent of Indonesia's coral reefs have been heavily destroyed and 35 per cent partly damaged, mostly due to human activity. The government recently formed a national maritime council whose task is to help protect the seas and reefs of Indonesia, which house more than 17,000 islands.