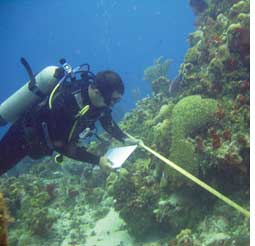 caribbean coral reefs have lost their complex structure and flattened over the past 40 years said a study by University of East Anglia in the UK. The marine population and fishing industry that depend on them feel the impact of this change the most. The coastline has become more vulnerable to wave action and hurricanes.

The researchers collected data from 500 surveys across 200 reefs from 1969 to 2008. Two factors led to their flattening: one, in the late 1970s the white band disease killed almost 90 per cent of them; two, in the late 1990s a bleaching event caused widespread death of corals, the researchers said in the study published in the June 10 issue of Proceedings of the Royal Society B.

Bleaching is a result of rising sea-surface temperatures. In 1998, the sea surface temperature rose by almost 4C.Temperature rise causes corals to expel the algae without which they cannot survive. The algae, called Zooxanthellae, give the corals their colour.

Unlike massive reef-building coral species such as the Acropoids, only smaller and short-lived coral species exist in the region now. "The study will hopefully bring about policies to maintain these ecosystems," said Lorenzo Alvarez-Filip, who headed the study. It will not be easy to undo the damage, said Vardhan Patankar, researcher with Reef Watch Marine Conservation in Mumbai. "Several factors control recovery of reefs. It is often difficult to predict the path and duration of recovery," he said. It is possible to maximize resilience by creating marine parks. Reducing fishing, tourism and pollution should also help.