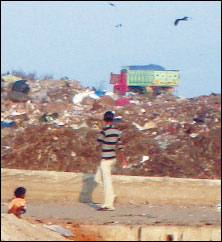 Public pressure may have forced the Mumbai municipality to plan closure of the landfill site at Deonar in the eastern suburb. But the municipality's decision to pay tipping fees of Rs 445 for treating each tonne of waste in the landfill has become controversial. In August 2009, an agrochemical company of Mumbai, United Phosphorous Limited (UPL), bagged the contract for closing the landfill on tipping fees basis to be paid over a period of 25 years. This would cost the public exchequer a total of Rs 3,500 crore, said a petition admitted by the Bombay High Court.


The public interest petition has alleged irregularities in the award of contract and has sought its cancellation.

No other major Indian city pays tipping fee to contractors; in some instances, it is the private firms that pay royalty to the civic bodies for getting the contract to manage waste, said the petition filed by Rishi Aggarwal of Mangrove Society of India's Mumbai chapter. “Tipping fee is an old concept adopted from industrialized countries. But it is now proven that garbage is not waste. A lot of it can be recycled and reused and private contractors can earn profits from it,” said Aggarwal while adding there is no need to pay tipping fee.

Waste management experts also opposed payment of tipping fees. Almitra Patel, a member of the Supreme Court committee for solid waste management said tipping fee system does not encourage reducing waste through recycling and reuse. “It is driving us towards wastefulness as it promotes spending public money on packing all the garbage into a piece of land that eventually turns into wasteland that leaches and pollutes air and groundwater,” said Patel.

There are better ways of treating solid waste, Patel said while citing a pilot project in the western suburb of Gorai in 2003 where a private company used windrow technology (the waste is piled in long rows that are turned for aerating the waste) to treat the waste; a six-metre high mound of waste was reduced to ground level in just 40 days, he added. The project was funded by the municipality. Patel said the civic body is not promoting this technology. Rather, it is promoting expensive and unproven technologies (see 'Mumbai's solid waste management plans expensive, dangerous', Down To Earth, May 31, 2007).

The National Buildings Construction Corporation (NBCC) has, meanwhile, offered to assist the municipal corporation in the Deonar project. A letter dated June 11, 2009 from the NBCC to the Mumbai municipality states that expenditure on waste processing plants can be easily recovered from selling products recovered from waste. The public sector construction enterprise said it is not paying any tipping fee on processing fee in any of its Municipal Solid Waste (MSW) projects. In any case, the maximum limit for tipping fees should not exceed Rs 300 per tonne, NBCC said.

The municipal corporation has defended the project saying the contract was awarded after following a fair selection procedure. Additional municipal commissioner R A Rajeev said the tipping fee of Rs 445 per tonne is reasonable and much lower than what a private firm is charging from the Delhi municipal corporation—Rs 800 for for collecting and transporting garbage and Rs 800 for dumping it in the landfill. He said NBCC did not participate in the bidding process. “They wrote to us offering their services after the bids were processed. Nothing could be done at that stage,” said Rajeev.

The Deonar landfill is a major public health hazard. Local residents have filed a number of petitions seeking closure of the landfill saying it is polluting the environment. The dump has also been linked to high morbidity and mortality in surrounding areas (see 'Gas Chembur,' Down To Earth, November 30, 2009). The landfill is over 80 years old and has outlived its utility. The Infrastructure Leasing and Financial Services Limited recommended scientific closure of the landfill in 2006.