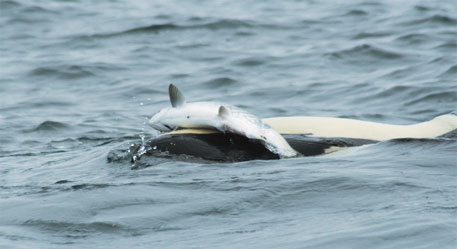 IN A world of complex prey-predator relations, bycatches and a human consumption that knows no bounds, conservation efforts are shifting from single species fisheries management to ecosystem-based management. But how can the ecosystem be managed when both the prey and the predator are endangered? US scientists recently analysed the relation between southern resident killer whale and chinook salmon to find the answer. Both share an endangered status.

The killer whales exclusively prey on the chinook to the extent that it affects the predator’s population growth. Rob Williams, marine mammal researcher at the Washington University, led a team of scientists to study 87 killer whales present in the Salish Sea in 2009 and envisaged its chinook requirement. The sea borders Washington DC. They derived the whales’ energy requirement by gathering data such as length at different ages, mass-to-length ratio, and eating habits of males and pregnant, lactating and post-lactating females.

The team then applied the information to the 87 killer whales. They found that they consume an estimated 662 chinooks in a day. Between May and September they could easily consume 12 to 23 per cent of the chinook available in Fraser River, that flows into the Salish Sea.

Recovery programmes for the whale aim to include 155 whales by 2029. If this is achieved, the whales’ demand for chinook would increase by about 75 per cent. Add to this natural mortality of salmons, human consumption and predation by sea lions, sharks and Northern Resident Killer Whale.

“If the killer whales alone eat so many salmons that they compete with fisheries, all predators together must compete with fisheries as well,” explains Malin Pinsky, biologist at Princeton University in USA. In such a scenario, single species fisheries management would be a failure because it would take into account only human consumption. “In ecosystem-based management, we would think both about how many salmons the killer whales need and how many we should catch,” Pinsky adds. One would have to take into account each detail of the ecosystem and then decide the best way to save the species.

Critics say ecosystem-based management is cumbersome. The more complex the ecosystem, the more the species to be managed; dynamics are not always about one predator-one prey. The question finally boils down to which species is worth saving first.

“Our point was to consider one exceptionally data-rich example. Even in this simplest example trade-offs indicate the need to take an ecosystem approach to fishery management,” explains Williams. Prioritise the species whose extinction probability is higher, the study suggests.