Black carbon from diesel, not from biomass, warms the globe 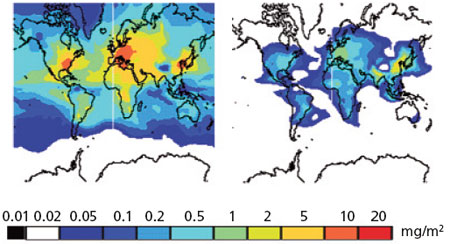 BLACK carbon, or soot, was known as a threat to only the public health until 2007 when the UN climate agency, IPCC, said it is a major contributor to global warming after CO2.

The fine particulate matter, which efficiently absorbs sunlight and causes atmospheric warming, is released in large amounts from the combustion of fossil fuels such as diesel and coal and biomass fuel like dung and wood. Scientists from University of California in San Diego, USA, recently studied different sources of black carbon emission and suggested the net warming effect of black carbon from fossil fuel combustion has a major bearing on the global warming than black carbon from biomass fuel burning. This is because of a cooling aerosol, sulphate, emitted along with black carbon.

Sulphates have a much brighter appearance owing to which they reflect sunlight and as a result cool the atmosphere. But different sources release different amounts of sulphate and black carbon. Diesel, for example, releases more black carbon and very little sulphate. Biomass fuel, on the other hand, releases more sulphate, negating the warming effect of black carbon it emits, said V Ramanathan who led the study.

To establish the theory, the scientists measured black carbon to sulphate ratio in air samples collected from Beijing, Shanghai and Yellow Sea. The ratio was high for Beijing where the air is dominated by fossil fuel emission. It was low for Shanghai air, owing to the mixed consumption of fossil fuel and biomass. The ratio for Yellow Sea air was skewed because ships in the region operate on cheap quality fuel that emits high levels of sulphate. The scientists then measured the solar heating rates at these places and with a little help from mathematics calculated the heating efficiencies of the air samples.

"Beijing air warmed about 100 per cent more efficiently than the air at other regions," they noted in the Nature Geoscience on July 25. Scientists hope policy makers can use the information to decide which emission sources to target for efficient pollution control.