why should four per cent of the agricultural workforce (mostly affluent) in high-income countries reap the rich harvest of an international trade regime, when 70 per cent farmers (predominantly indigent) in developing countries get a raw deal under the same pact? 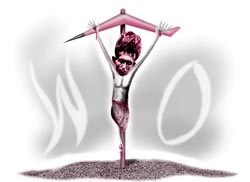 why should four per cent of the agricultural workforce (mostly affluent) in high-income countries reap the rich harvest of an international trade regime, when 70 per cent farmers (predominantly indigent) in developing countries get a raw deal under the same pact? This is a question member nations will be hard put to answer, unless they change their outlook drastically in the lead-up to the Fifth World Trade Organization (wto) Ministerial Conference in Cancun, Mexico, in September.

The possibility of such a shift seems remote, with key industrialised countries sticking to their guns on crucial issues such as domestic support measures (or general subsidies) and export subsidies. The disturbing fallout from the current impasse over liberalisation of the agricultural sector is that it may derail the entire negotiations. The March 31, 2003, deadline to work out numerical targets, formulas and other "modalities" for countries' commitments has already been missed (see: 'Lost chance', March 31, 2003). Now, the outcome of the Cancun meet is largely predicated on the progress achieved in issues related to agriculture.

Market access in terms of tariffs and tariff quotas is another area of concern. On this score, the us is attempting to take the fight to the rival camp by arguing that most of the high tariffs are prevalent in developing countries, and that it is they who need to reduce these further. Even as the us is on a technically sound footing, tariffs are the only form of protection that developing countries can offer to their farmers since they cannot afford to provide huge subsidies, as Japan, the eu and the us do.

Support measures such as subsidies contribute towards keeping the prices of agricultural products artificially low in international markets. The reduction in subsidies, which amounts to nearly us $1 billion a day, will push global prices higher. This would benefit developing countries in two ways, opines Biswajit Dhar, professor and head, Centre for wto Studies, Indian Institute of Foreign Trade. "Firstly, developing countries will be able to access developed country markets because of the low-cost advantage that they enjoy. And secondly, the threat of cheap imports (to developing countries) will wane," he points out.

Subsidies and protectionist policies of industrialised nations cost developing countries an estimated us $26 billion annually in lost agricultural and agro-industrial income, according to a recent study conducted by the International Food Policy Research Institute (ifpri). They also displace about us $40 billion of net agricultural exports from developing countries each year. Most of the blame for the situation must be borne by the eu, which spends more than us $180 billion annually. The us' policies cause a little less than a third of the loss and displacement, while Japan and other high-income Asian countries are estimated to be responsible for another 10 per cent.

Nearly two-thirds of the gains from any broad-based reform of the sector are likely to go to developed nations such as Canada, Australia and the us, and the rest mainly to developing countries that are large exporters. As a result, there is a lack of political will in the eu to make any substantial concessions. Pascal Lamy, trade commissioner, European Commission, said during his recent visit to India that the eu was unlikely to dismantle its Common Agricultural Policy (cap). He added, "We believe agriculture is intimately tied up with how we run our rural economy, society and landscape. Therefore, there are limits to the international division of labour." It is believed that with the expansion of the eu, the level of subsidisation is likely to rise further.

In a move that smacks of hypocrisy, the us has tried to project itself as being strongly committed to liberalisation. us trade representative R Zoellick and agriculture secretary Ann Veneman claim that the country is ready to cut subsidies if others go along with it. But Dhar contends, "Actually, the us will do nothing. While the country is saying that trade distorting support should come down, this is hardly the thing it is dependent on." Most of the support it provides is under what is perceived to be non-trade distorting subsidies under the wto and these can be employed without limits. Another giveaway is the 2002 us Farm Bill, which authorises a us $180-billion increase in domestic farm support from 2002 to 2011.

One of the other issues of importance to developing countries that any agreement should reflect is the need for special and differential treatment, whereby developing countries are accorded special privileges in terms of exemptions from some rules or preferential treatment in the application of certain others. Non-trade concerns like food security, rural livelihoods and development are also extremely important.

For headway to be made in Cancun, the eu, Japan and the us must pledge to reduce subsidies substantially. More importantly, they need to deliver on such assurances and ensure that the post-Uruguay Round scenario -- wherein minimal reductions were made on sensitive items -- is not repeated. The perceived "Development" Round will be reduced to a farce if the developing world fails to benefit from it in terms of agricultural trade.