Though the pledges were hailed as a trust-building development, many challenges still need to be addressed 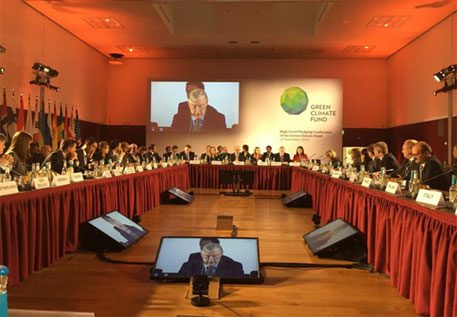 The Green Climate Fund (GCF)’s first "pledging conference" concluded in Berlin, Germany, on Thursday with $9.3 billion being pledged as support for climate action in developing countries. This figure was just short of the unofficial target of $10 billion.

GCF is the main financial instrument under the United Nations Framework Convention on Climate Change (UNFCCC) under which developed countries responsible for causing climate change are morally obliged to help developing countries with new finance for public and private sector projects and programmes.

In the pledging conference, the UK pledged $1.1 billion and joined 20 other countries which have contributed to the GCF. The conference also saw significant pledges by Italy ($313 million), Norway ($130 million) and developing nations like Mongolia which committed $50,000.

Countries like Australia, Austria, Belgium, Ireland and Canada, however, did not meet the expectations of the global community. They were expected to make substantial contributions to the fund.

Christiana Figueres, executive secretary of the UNFCCC, described the capitalisation of the fund as “one of the wisest investments in the 21st century”. Though the pledges are just initial contributions for the capitalisation of the fund, GCF will start programming in 2015, disbursing funds and deploying resilient and clean solutions. It will also encourage other developed countries to pledge significant amounts.

More unconditional pledges, however, need to be pumped into the fund. It must also grow into a functional institution. Issues of transparency and efficiency remain unaddressed. The goal of the GCF is to receive $100 billion by 2020. In that sense, the current amount of $9.3 billion is less than 10 per cent of the targeted amount.

Countries will need sincere political will to chalk out more proposals and mobilise new sources of money. For developing countries, finance is central to climate negotiations. Only when the sources of finance are resolved will the world be able to reach a fair and inclusive climate deal in Paris in 2015.
Web edition Web edition News News News United Nations … UNFCCC UNFCCC Green Climate Fund Down to earth Climate deal Centre for Science …
SUPPORT US