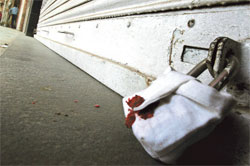 UNCERTAINTY prevails over the law the government has been using to legalise illegal constructions in Delhi. In December 2011, the Supreme Court had taken cognizance of the law and asked the government to explain how it adheres to the Masterplan for Delhi, 2021. The hearing scheduled for March 13 did not take place. The new date has not been scheduled yet. The National Capital Territory of Delhi Laws (Special Provisions) Bill was introduced as an ordinance for a year in 2007 after the Municipal Corporation of Delhi (MCD) launched a drive in 2006 to seal all commercial establishments operating from residential areas. The ordinance came as a relief to traders as it did not allow demolition of any building constructed before February 7, 2007, unless built for public interest like parks.

The government extended the enforcement period of ordinance thrice, each time for a year and finally passed it in the state assembly on December 12, 2011 making it a law. The law will remain applicable till December 2014, or till the masterplan for the city comes into force. The masterplan has been under revision for the past decade.

The court is attempting planned development of Delhi relying completely on the masterplan. But the law comes in the way. It, therefore, asked the Delhi Development Authority (DDA), MCD and the state government to explain how the law adheres to the masterplan. MCD had started the sealing drive in 2006 prompted by the M C Mehta petition that sought removal of hazardous industries from within the city area. Subsequent hearings had led to revelations about businesses and shops operating from residential areas.

Usha Ramanathan, senior advocate and specialist on land laws, says had planned development been the focus, the state government would not have provided band-aid solutions through the special provisions bill. “The bill and the masterplan are attempts to regularise the illegalities and create scope for more illegalities,” she adds.

Illegal constructions exist because the authorities concerned fail to provide adequate land, say DDA officials. Data reveals DDA has always failed to provide land the masterplan demands. For instance, if the masterplan asks for 6,000 shopping complexes, DDA gives land for only 2,000. The 4,000 that come up are illegal, he says.

The gap between the masterplan and ground reality exists because the plan is drawn up by DDA and the state government, while MCD is left to implement it, say MCD officials. The concerns MCD has raised before the Ministry of Urban Development show that implementation of the masterplan is difficult.

Another big problem MCD faces while surveying properties to check their legal status is the proof of ownership. “We no longer accept power of attorney as proof of ownership. Only sale deed is accepted,” says Ramesh Goel, senior engineer at MCD. But 95 per cent people in the city have only the power of attorney because most houses here are very old, he says. The government needs to look at locality specific building by-laws. Also, the government recognises property surveyed way back in 1962. It does not recognise the sub-divisions created later on. Therefore, a majority of property in Delhi is illegal on paper.

For planned development, Delhi’s masterplan provides strategies for housing the urban poor. The government must first make space for jhuggi-jhopris, the village population and street hawkers, says Goel. The national policy for urban street vendors creates special zones for street vendors and hawkers. But these cannot be implemented till the bill is in force. The Delhi Urban Shelter Improvement Board, which came into force in 2010, has identified 685 jhuggi-jhopri clusters in the city. “Relocation of these is likely to take considerable time,” says the special provisions bill. DDA is drawing a policy for farmhouses in Delhi. This too, will take at least two years.