Asks why it allowed Nirma to create confusion on wetland 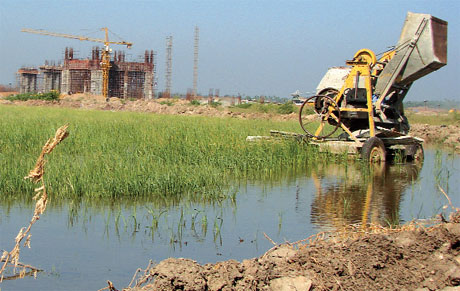 ON SEPTEMBER 9, the Supreme Court ordered detergent company Nirma to file its reply to the show cause notice issued by the Union ministry of environment and forests (MoEF) within three months. MoEF had issued the notice in May, asking the company to explain within two weeks why the environmental clearance granted to its cement plant in Gujarat should not be revoked. The site is believed to be on wetlands.

The notice was issued after a report by a Supreme Court-constituted committee classified the project site in the state’s Bhavnagar district as a wetland and recommended relocation (see ‘Nirma plant in trouble again’, Down To Earth, June 1-15, 2011).

The apex court order came while it was hearing a petition filed last year by Khimjibhai Lakhabai Baraiya, a Bhavnagar resident, on behalf of the local community. They say the plant will affect the wetland. During the hearing, the court also put MoEF on the spot saying it had learnt nothing from the judgement on Lafarge cement plant in Meghalaya in July. As per the Lafarge judgment by the apex court, experts nominated only by MoEF can give opinions on matters related to environmental clearances.

The reprimand came in the wake of a letter written by MoEF to Nirma on August 25, in which it agreed to the company’s request to undertake a three-month study of the flora and fauna of the project site. Nirma contends there is no information available on the flora and fauna of the site—a subject studied in the committee report. MoEF had also asked Nirma to ascertain “whether the site is a wetland or a water body”.

Finding no reason for MoEF to get into the question of flora and fauna, the court asked the ministry to file an affidavit explaining why it allowed Nirma to conduct its own study. The court said there is no question of examining whether the site is part of wetland or water body. The crucial point, the court said, is whether the land is on wasteland as Nirma had claimed while obtaining the environmental clearance in 2008. If the location consists of water bodies then the project’s clearance will have to be revoked, the court said. Anand Yagnik, counsel for the petitioner, says, “The judiciary is dissatisfied with the current state of the clearance process. During the hearing, the court made an oral observation about the rampant corruption in MoEF.” The next hearing of the case is in December.

The International Convention on Wetlands, or the Ramsar Convention, defines wetlands as area of marsh or fen, with water that is static or flowing. India adopted this definition in 1982 after joining the Convention. The recently formulated Wetland (Conservation and Management) Rules, 2010, by the Centre under the Environment (Protection) Act have also adopted this definition.

The report of the committee constituted by the apex court had also dealt with this difference. It says water body is a generic phrase to “include any depression on land, natural or manmade, that holds water for sometime”. It defined wetland as also being a generic term that “covers a very wide range of aquatic habitats, from waterlogged marshy lands to deep water bodies (lakes and reservoirs)”.

Asad Rahmani of non-profit Bombay Natural History Society clarifies, “There is no ecological difference between a water body and a wetland.” The difference is semantic and this is what Nirma is trying to take advantage of, adds Rahmani, who was in the committee as an expert. He says, “I have visited the project site. Undoubtedly, it is a wetland or a waterbody, whatever you want to call it.” Presence or absence of any flora and fauna does not decide whether any given site is a wetland or not, he cautions. When contacted, Nirma did not respond.