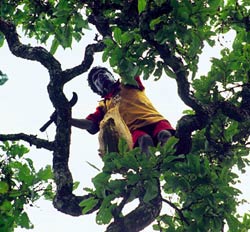 The court of judicial magistrate of Chamrajnagar in Karnataka has upheld the rights of Soliga tribal people to harvest and sell forest produce independent of the forest department. On May 24, the court ordered Punjanur range forest officer to return 1,100 kg of honey seized from the Hosepodu gram sabha, located within the Biligiri Rangaswami Temple (BRT) tiger reserve, during a raid. The honey was returned to the gram sabha.

BRT tiger reserve is the first protected area in the country where community forest rights (CFR) have been granted under the Forest Rights Act, 2006 (FRA). On October 2, 2011, as many as 25 villages of Soliga tribals located inside the sanctuary received community rights, including the crucial forest conservation and management right to around 60 per cent of the sanctuary area, comprising the Yellandur, K Gudi and Punjanur ranges. Some 30 more villages located inside the sanctuary are awaiting CFR.

However, a year-and-a-half down the line, CFR implementation has not made much headway owing to differences between forest officials and the tribal community over forest management and harvesting practices of minor forest produce (MFP). Forest officials have repeatedly expressed discomfort with the idea of commercial harvesting of MFPs by people of villages within a protected area. But MFP from the reserve is already being commercialised by Large Adivasi Multipurpose Cooperative Society (LAMPS), initiated by the department itself. The body is presided over by a local forest officer and has seven tribal directors.

However, ever since CFR rights were given, the community has repeatedly expressed its desire to set up independent, gram sabha-led mechanisms to process and market MFP, which includes honey, lichen, gooseberries (amla), wild mango, soapnut and medicinal herbs. “We do not want to depend on LAMPS,” says Acchuge Gowda, community leader of Yerekenagadde village and former president of Soliga Abhivruddhi Sangha (SAS), the organisation of the Soligas of BRT. “Since it is entirely controlled by the department, we cannot set our own prices. For instance, for a litre of honey, only Rs 90 reaches the collector, while Rs 160-200 is taken by LAMPS, which does not render accounts to us. We want a more transparent system.”

MFP: who is the boss?

The simmering conflict between the forest department, which wants to retain control over the Rs 25 lakh worth of annual MFP trade in the reserve, and the community, appears to have been the reason behind the altercation. In his court statement, the range forest officer who confiscated the honey said he had acted on a complaint from two LAMPS directors, stating that the village is illegally marketing its honey independent of LAMPS. Park director and conservator of forests, Lingaraja expressed similar views. “The honey is being sold in Tamil Nadu through an NGO, while we have a government organisation through which marketing is being carried out,” he said. The crucial question that remained unanswered was: why independent marketing should be considered a crime when the village had received CFR rights, and the decision had been taken by the gram sabha.

Meanwhile, the two LAMPS directors who made the complaint, have said on condition of anonymity that they were asked to sign the document by the department officials and that they were not aware of its contents.

Another significant fact is that three days after the raid, LAMPS raised its honey procurement price from Rs 100 to Rs 120 per litre, in a desperate bid to retain control of MFP trade. Hosepodu village society, however, has been paying Rs 150 per litre as procurement price ever since it was constituted, says Archana of non-profit Keystone Foundation, which has been working in the village for the past many years. The society is also getting a better market price of Rs 360 per litre, she says. “This higher procurement price has acted as a strong incentive for other villages in the sanctuary to set up similar independent marketing mechanisms,” she says.

Community leaders complain that the department has ignored their forest co-management plan, which they submitted for discussion and joint implementation, making its implementation difficult. In this plan, the community has demanded that it should be allowed to manage its CFR forests range-wise rather than village-wise. This is how the Soligas have traditionally managed their resources.

“We, Soligas, have a clan system and each clan has its territory. All villages within the territory share it without conflict,” says Kadanamadegowda, taluka president of SAS. “Changing the system will cause needless conflicts and confusion.” The varied composition of the forests, he says, also made such management necessary because all kinds of MFPs are not available evenly in every part of the forest. “During collection season for each produce, all members of a clan come together to harvest it.”

The plan also offers to demonstrate the Soligas’ traditional use of fire as a forest management tool. “We want the department to give us 404 hectares, on which we will ensure good regeneration and develop a healthy forest within a decade,” says Acchuge Gowda. But the department has not addressed these concerns as it does not fit into the legal framework.

“We want to manage our forests, but we are aware we cannot do so without department help, at least in the beginning,” says Kadanamade Gowda, “We need training in marketing MFP and in many management practices instituted by the department. However, we, too, have our contribution to make. What we want is that the department should recognise this potential, not insist on  rigid laws and practices.”