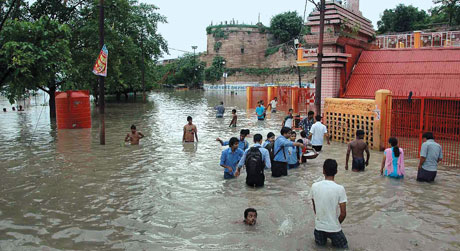 ALL construction activities along the banks of the river Ganga in Allahabad were brought to a halt last month. The Allahabad Development Authority (ADA) issued a moratorium in compliance with a state high court order to stop ongoing projects within 500 metres of the river’s highest flood level.

The court had issued the directive in April while hearing a public interest petition on growing pollution in the Ganga. ADA approached the Supreme Court against the directive, but its appeal was dismissed. The authorities now have time till September 23 to submit the record of plots and areas that got submerged during the 1978 flood, the worst in the past century, for the high court to decide the highest flood level and, accordingly, the inviolate floodplain zone.

“The high court directive sets a precedence in that it perhaps for the first time identifies the river’s natural limit as its highest flood level, and sets a limit to where construction is permitted,” says Manoj Misra, convener of Yamuna Jiye Abhiyan, a campaign group for protection of floodplains.

In 2005, the Delhi High Court had issued a similar direction to remove encroachments within 300 metres of the river Yamuna passing through Delhi. “Then, the court did not define the river and the authorities interpreted the order variously,” adds Misra.

As of now, there is no regulation to protect floodplains from encroachment, where lives are at risk when rivers are in spate. Inevitable is the loss of its ecology as well as groundwater recharge zones.

Though the Union Ministry of Environment and Forests (MoEF) has been attempting to notify a River Regulation Zone (RRZ) on the lines of the coastal regulation zone notification for almost a decade, its efforts have not moved beyond meeting just once. This is despite the fact that the National Institute of Ecology (NIE) in Delhi submitted its draft proposal for the RRZ notification in 2002. The draft proposal, too, seeks to regulate construction activities within 500 metres from the boundary of the floodplain, which is the highest flood level. It has, though, watered down the definition of the highest flood level, from the area that may get inundated once in 100 years to the area that gets flooded once in fifty years.

“If the standard definition is to be used then no further construction as an example would be allowed in Noida, which is unrealistic,” says Brij Gopal, principal draftsperson of the report, justifying his recommendation.

The ministry is dithering on the matter, says Gopal, also a member of the experts group that MoEF constituted in May this year to draft the RRZ notification.

Ministry officials say there is much background research to be done. “We cannot set any timeframe for notification since it is a complex issue,” says Nalini Bhatt, adviser to the ministry and member of the experts group. The notification will not be retrospective, she clarifies. Gopal argues that if encroachments can be removed retrospectively for road and metro-rail projects, then why not for protecting the ecological services, such as groundwater recharge, that a floodplain provides.

The moot point is that rivers in India have a unique hydrology due to the monsoon patterns and most attain a vast spread over short spells. Then there is no uniform topography. “How can we classify rivers in mountainous terrain, where it hardly swells, as similar to those in the plains. We need different classifications and norms for individual river types and for this the notification needs to be carefully drafted,” says R C Trivedi, a water quality scientist and member of the experts group.

The primary objective of notifying RRZ is to protect people from floods. But in India, the objectives are to prevent dumping of garbage, discharge of untreated wastewater and further encroachment on the floodplains. “Why do we need a separate law for river zones where these are already regulated features,” Trivedi wonders.