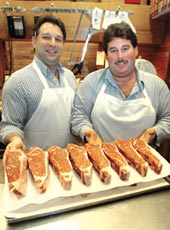 The diagnosis of mad cow disease in an animal in rural Washington spoilt the new-year party of the us $70 billion us beef industry this year. As many as two dozen nations, including Australia, Japan and Russia, put breaks on us beef imports, which raked in about us $3.2 billion in 2003. The us stock markets too reacted sharply to the news with share prices of many listed fast food giants like Mcdonald's and Wendy's falling rapidly.

The episode gave South Korea, smarting under a us ban on chicken import after avian flu reared its head there, to get back at the us in the same token. Korea, together with Japan, was the first country to freeze the us beef imports. Subsequently, a high-powered us trade delegation made a flying visit to Tokyo and Seoul to urge the Asian countries to lift the ban. A similar mission was taken out to Mexico too.

The episode of mad cow, a brain-wasting disease which is scientifically known as bovine spongiform encephalopathy, reported in a Holstein dairy cow in Washington state on the eve of Christmas last month caught the authorities and the meat industry unawares. The us sought to blame Canada which had reported the mad cow disease in a farm animal early last year. Canada, which lost billions of dollars because of its beef being banned by many countries, however, rejected the charge.

Scientists believe that eating bse-infected beef meat can cause Variant Creutzfeldt-Jakob Disease (vcjd), which first emerged eight years ago, and can take years before symptoms show.

Even as the us Green Party accused the government of covering up the extent and cause of the disease, and being hand-in-glove with industry, cattle prices in the us fell by nearly 20 per cent. The Bush administration was forced to ban the use of sick or crippled cattle in human food, a measure long opposed by the meat industry. Consumer groups and Democrats have expressed skepticism about whether that, and related regulatory changes, go far enough.