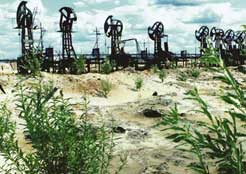 Environmentalists have criticised the proposed route for an oil pipeline from Siberia to Russia's Pacific coast, saying it could send 4,000 tonaes of crude spilling into Lake Baikal, the world's largest freshwater body, in just 20 minutes, if ruptured. It passes within 800 metres of the lake and it also threatens wildlife.

The pipeline is a key geopolitical tool for President Vladimir Putin's government, allowing Russia to send its oil to the energy-hungry economies of China, Japan and South Korea.