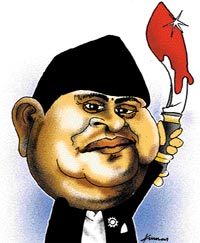 Can peace be ensured by sacrificing animals? Nepal's King Gyanendra thought it could and in doing so invited the wrath of animal activists. After he offered animal sacrifices at temples in Guwahati and Kolkata, animal rights groups accused the royalty of violating wildlife laws. They said that the King had committed a crime and he should be punished. Under the Prevention of Cruelty to Animals Act, 1960, animal sacrifice is a crime punishable by five-year imprisonment in India. It is believed that the King donated a buffalo, a goat, a sheep, a duck and a pigeon to be sacrificed at the sacred altar in Guwahati's Kamakhya temple. Unfazed by protests, a day later, he performed the ritual again at the Kalighat temple in Kolkata. Now the animal welfare organisations have pledged to take up the matter with international groups such as peta (People for Ethical Treatment of Animals).