This time round, US secretary of energy Hazel O'Leary's visit to India was a successful business trip 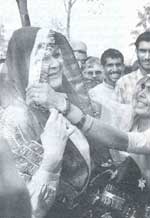 THAT toothy grin is on again. After the previous fiasco, when US secretary of energy Hazel R O'Leary visited the village of Dhanawas (in Gurgaon, Haryana) near Delhi last July, some residents promptly shot down her offerings of renewable energy technologies; they were more interested, they said, in better schooling facilities for their children. On February 11 this year, a wiser O'Leary returned with more gifts, and was mindful of the sentiments and concerns of the ruralfolk.

Along with the 1 kilowatt photovoltaic water pumping system and 2 solar street lights she presented to the Dhanawas panchayat, O'Leary also brought 3 9-watt fluorescent lamps for the village school. She expressed the hope that these samples of American expertise in renewable technologies would enable the younger lot in Dhanawas to "study at night after the day's work so that they could get better jobs". She also gave the school headmistress a set of books to help her students learn English.

Indian officials and energy experts who escorted the US delegation applauded this munificence. The director of the Tata Energy Research Institute, R K Pachauri, asked O'Leary to make Dhanawas a port of call on each of her future visits to India. Behind it all was unalderated commerce. In fact, a senior bureaucrat***(what name?) of the Union ministry of non-conventional energy sources told her that there were over 6 lakh villages in India that could do with perpetual and cheap energy.

O'Leary also roped in a bagful of business for American renewable technology firms, including negotiations of 23 Memorandums of Understanding, mostly between private parties in both countries. The investment is to the tune of $1.5 billion, raising the total value of energy deals between Indian and American private and government departments during the last 8 months, to almost US $10 billion.

The New York-based Acres International Corporation is to build a series of small hydroelectric plants on the Bhilangna river in Uttar Pradesh. The Ohio-based Dodson Lindblom International will implement a similar project in Madhya Pradesh. Other projects include the sale of 600 large wind turbines, manufactured by Kenetech Windpower Inc of California. A senior official in O'Leary's team said that US firms have been attracted mostly by the "the Indian government's tax incentives and assurances of a 16 per cent rate of return on equity".

As usual, however, the Indians want more. Union minister for power N K P Salve said smoothly that he saw the US secretary as a "saviour for India's ailing power sector". He went further, proclaiming a commitment to attract a total US investment of $200 billion. But whether the surge will endure is anybody's guess.