Cyclone Lehar may be as severe as Phailin

Cyclone wind speed may reach up to 200 km/hr on Thursday at time of landfall; heavy rains predicted from Wednesday evening

The very severe cyclone, Lehar, was moving towards the Andhra Pradesh coast at a speed of 15 km/hr on Tuesday. By the time it hits Andhra Pradesh coast, the cyclonic winds would gathered speed   According to the India Meteorological Department (IMD) cyclone warning issued on Wednesday morning, the storm is located 700 km east-southeast of Machillipatnam, 640 km east-southeast of Kakinada and 620 km southeast of Kalinapatnam. The storm will further intensify and is likely to make a landfall close to Machillipatnam in Krishna district around noon on Thursday. It was initially expected to make the landfall near Kakinada in East Godavari district.

By Wednesday afternoon, the cyclonic storm moved west-northwestward with a speed of 15 km/hr. It is now centred 570 km east-southeast of Machillipatnam and 510 km southeast of Kakinada.

Lehar appears to be as severe as Phailin was in the open ocean. Based on modelling studies and data collected in real time from wave rider buoys located at Visakhapatnam, Gopalpur (in Odisha) and a few other places in the open ocean, scientists from the Indian National Centre for Ocean Information Services (INCOIS) have predicted that the maximum wave height could be between 2.5-3.5 metre off the Andhra Pradesh coast from Nellore to Srikakulam from Wednesday to Thursday night. 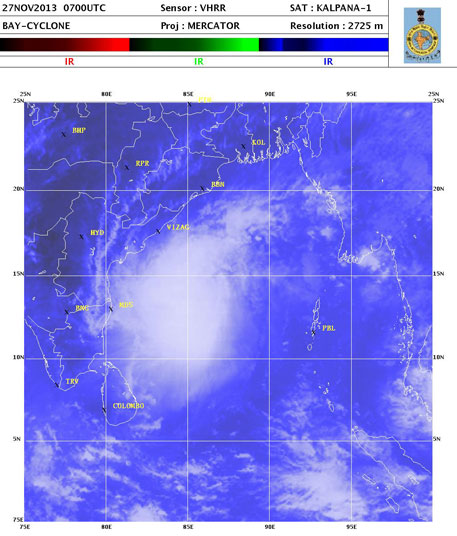 The sea along and off Andhra Pradesh and south Odisha coast will be very rough from  Wednesday evening. Storm surge of height about two to three metres above normal level is expected to inundate low-lying areas of West and East Godavari, Guntur and Krishna districts of Andhra Pradesh.

Extensive damage to thatched houses, crops, disruption of power and communication lines. disruption of rail and road traffic is expected. Floods may occur after the cyclone.

The coastal areas of Andhra Pradesh are on high alert. Special officers have been appointed for the nine coastal districts. Shifting people from low-lying areas has been started. Thirty teams of the National Disaster Response Force are ready for rescue operations. A deputy inspector general of NDRF, New Delhi, has been deputed to Andhra Pradesh to supervise and monitor the deployment of the teams. The state government has requested the Defence Ministry to send four helicopters to be stationed at Visakhapatnam. The newly formed State Disaster Response Force (SDRF), consisting of 450 personnel, are being deployed for rescue operations.

“All fishers in coastal districts have been alerted with the help of mobile phone database available with the fisheries department, not to go out to the sea in view of the cyclone alert,” says C Parthasarathi, commissioner, state disaster management department. Out of the 580 coastal villages in nine coastal districts, the fisheries department has contacted 529 villages so far, alerting them about the impending arrival of cyclone and for details of boats out at sea. Out of the 6,160 boats that had ventured into the sea, 5,550 boats have returned.

Adequate stocks of medicines is kept ready with the health department to meet any emergency situation. Medical Teams are being sent to the coastal districts, said the commissioner.