Tamil Nadu and Kerala slug it out over Mullaperiyar dam 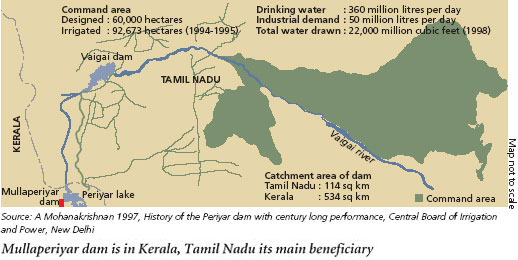 THE longstanding controversy over the Mullaperiyar dam on the river Periyar assumed bitter proportions in December 2006 with the Kerala government accusing its Tamil Nadu counterpart of pulling out of talks initiated by the Union minister of water resources, Saifudin Soz. The talks had begun on September 25 after directives from the Supreme Court. But it reached a dead-end with both sides refusing to budge from their well-held positions. Tamil Nadu's minister for public works, Durai Murugan, insisted that raising water levels in Mullaperiyar's reservoir is necessary to irrigate large tracts in the state. Kerala's minister for water resources, N K Premachandran, on the other hand, contended that raising the reservoir's levels would be inimical to the safety of 35 lakh people who live in districts downstream Periyar river.

Mullaperiyar dam is situated in Kerala's Idukki district, but it's owned and operated by the Tamil Nadu government according to a 1886 agreement between the Maharaja of Travancore (which today is part of Kerala) and the then Madras Presidency. About 3,200 hectares (ha) were leased out by the Maharaja--many in Kerala say he was forced by the colonial state to do so--and the 47.25 metre high masonry dam came up in 1895, along with a baby dam. About 60,000 ha in Theni, Madurai, Sivaganga, Ramanathapuram, and Dindigul districts in present day Tamil Nadu were intended as beneficiaries of irrigation waters from Mullaperiyar. Water is brought through a 1.6 km long tunnel till the Tamil Nadu-Kerala border and then flows through open canals to Churuliyar river which feeds the Vaigai dam in Tamil Nadu (see map The disputed dam). From there a network of canals take the water to the fields.

Mullaperiyar's reservoir level is the bone of contention between the Kerala and Tamil Nadu governments. Since 1970, Kerala has argued that the dam having outlived its life of 50 years is unsafe to maintain water at 46.3 metres--the full reservoir level--and it should be restricted to 41.45 metres. In 1979, the Central Water Commission (cwc)-- the premier government agency dealing with dam safety--was asked to look into the matter; it suggested reduction of water level to 41.45 metres as an emergency measure along with other measures to strengthen the dam. Tamil Nadu agreed to this limit. Another committee headed by the then cwc chairperson B K Mittal was appointed in 2001 to look into the matter. It stated that the reservoir level be raised to 43.28 metres, after the strengthening measures were implemented. This was to be on an interim basis, and later reservoir levels could go up to the original level of 46.3 metres.

The Kerala government however contends that the committee's recommendations were based on a stress analysis of the baby dam and not the main dam. It cites a 2003 study by Indian Institute of Science, Bangalore stating that the main dam will develop tensile cracks in case of an earthquake. The study also says it's unsafe to increase water level beyond 41.45 metres. There has been some work to strengthen the dam but Kerala argues that it has not yielded much result.
Courting disaster In 1998, a petition filed on behalf of the Periyar-Vaigai Single Crop Cultivating Agriculturist Society noted that water levels in Mullaperiyar reservoir has not gone above 41.45 metres since 1979, even though Tamil Nadu has complied with cwc's directives. Filed before the Madras High Court, the petition argued that this shortfall caused much losses to the more than 2.50 lakh families in Madurai who depend on Mullaperiyar's waters. Other cases were also filed in the Tamil Nadu and Kerala High Court.

In 1998, all Mullaperiyar-related cases were transferred to the Supreme Court which, in its order of February 2006, observed that the dispute is not a 'water dispute'. "The right of Tamil Nadu to divert water from the Periyar reservoir for... irrigation or to... generate power or for other uses is not a dispute... The main issue... is about the safety of the dam on increase of the water level to 43.28 metres," the court noted. It allowed raising the reservoir level to 43.28 metres and directed Tamil Nadu to carry out the strengthening measures suggested by cwc, and restrained Kerala from causing any obstruction.

But matters worsened in March 2006 when Kerala's Legislative Assembly passed the Kerala Irrigation and Water Conservation Amendment Act, 2006. The amendment empowered Kerala's Dam Safety Authority (kdsa)-- a body mandated in 2003 by the original Kerala Irrigation and Water Conservation Act--to evaluate safety of all dams in the state. It was also "empowered to advise the government to suspend the functioning or to decommission a dam if public safety demanded". Twenty two dams constructed during 1895-1963 including the Mullaperiyar dam were brought under kdsa's jurisdiction. 41.45 metres was fixed as safe height for Mullaperiyar's reservoir. Tamil Nadu took the matter back to the Supreme Court. It filed a petition on March 31, 2006 to declare the Kerala act as unconstitutional.

Water rights
Many in Kerala feel that the 1886 deed should not be continued since it was forced upon the Travancore ruler. In 1970, Kerala did revise the original deed and got fishing rights. It also increased the rent to Rs 30 an acre (0.4 ha) from Rs 5, but water remained free for Tamil Nadu.

Many in Tamil Nadu argue that Kerala is eyeing extra water from the Mullaperiyar reservoir to generate electricity. S N Sadasivan's book River disputes in India Kerala rivers under siege, has given ballast to their arguments. Power generation at the Idukki reservoir, downstream of the Mullaperiyar dam will come to a halt if the reservoir level is increased from 41.45 metres to 46.3 metres, Sadasivan points out. The Kerala government, however, maintains that the Idukki project was designed after discounting the 46.3 metres water storage in the Mullaperiyar dam.

Farmers in Tamil Nadu maintain that water rights have already been established during the past century and cannot be reverted. The Kerala government, however, argues that the gross area irrigated by the Mullaperiyar reservoir actually increased from 24,280 ha in 1896 to 69,200 ha in 1970-71 (when the water level was 46.3 metres) to 92,670 ha in 1994-95 (when water level was reduced to 41.45 metres). But Tamil Nadu claims that this is due to the modernisation of Periyar-Vaigai project, which reduced seepage loses by 6.7 thousand million cubic feet.

How much water exactly?
The Kerala government also argues that increasing Mullaperiyar reservoir's height to 46.3 metres would mean a mere 5 per cent increase in water for Tamil Nadu. It says that at 41.45 metres, the dam has an useful storage of 6,118 million cubic feet (mcft) as compared to 7,666 mcft at 46.3 metres. But there is no data on the difference this 1,548 mcft deficit would make for users in Tamil Nadu. There has been no realistic assessment of the use that Mullaperiyar's waters has been put to. But Tamil Nadu did admit in a 1998 affidavit before the Supreme Court that it drew 21,000 mcft. So, it has actually been withdrawing much more than the reservoir's capacity of 6,118 mcft.

Kerala has never taken up this matter. In fact, at the inter-state ministerial meet, Premachandran said Kerala can part with more water.He noted "A more equitable solution for Tamil Nadu would be to create excess storage capacity within its own territory."

This will upset the experts like Sadasivan who predict that in the next 50 years, Kerala will face grave water shortage. Kerala also has to find out if water has to be released for the health of heavily polluted Periyar.

Today Kerala is floating its old idea of a new dam. Murugan is not convinced. "cwc found the construction of a new dam unfeasible in 2001." But the reasons for it being unfeasible are not in the public domain.

In his 1997 work, History of the Periyar dam with century long performance, A Mohanakrishnan, chairperson of Tamil Nadu's Cauvery Cell points out, "No provisions have been made for earthquake." According to mining and geology department of Kerala, and the Thiruvananthapuram based Centre for Earth Science Studies, the dam stands over deep-seated fractures vulnerable to earthquake. They cite the example of Koyna dam in Maharashtra which burst due to seismicity.

Six years after Mittal committee's recommendations we do not know if these concerns, we have no idea if dam has actually been strengthened. Unbiased scientific data on dam safety and water use has to be the basis of solutions. Politicising has vexed matters.