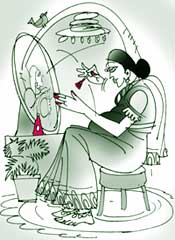 theEuropean Parliament has permanently banned the use of six phthalates used for making toys following health concerns. The unanimous decision was taken in Brussels, Belgium on July 5. The decision comes as a reaffirmation of a temporary ban placed in Europe in 1999 on the use of this group of chemicals saying children may absorb them through their mouth, if they chew on toys containing phthalates.

Meanwhile, a recent us study claims exposure of pregnant women to phthalates through plastic articles, cosmetics such as nail polish, and other consumer products may obstruct sexual development of their sons. Phthalates seem to have a "gender-bending" effect and may lead to genital problems in male infants, even when their expecting mothers are exposed to levels found in everyday life, according to the study to be published in the August issue of Environmental Health Perspectives (Vol 113, No 8) . Phthalates also increase the risk from allergies, asthma and cancer.

Shanna Swan of University of Rochester and colleagues studied 85 baby boys born to women exposed to phthalates during pregnancy. The scientists measured the anogenital distance (agd) between the anus and the penis base. The agd is twice as long in boys as in girls, mainly because the hormone testosterone elongates the perineum separating the anus from the testicles.

Earlier studies in animals have shown phthalates -- which mimic oestrogen -- keep testosterone from doing its normal job, leading to agd reduction. At higher doses, animals develop more serious abnormalities such as undescended testicles and misplaced openings to the urethra on the penis -- a group of symptoms called the "phthalate syndrome" in animals.

When Swan's team measured concentrations of nine phthalate metabolites in the urine of pregnant women, they found four were linked with shorter agd in sons born to women showing high exposure levels.