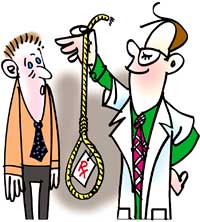 A controversial Swiss clinic, which has helped nearly 40 British people commit suicide, is to open an office in the uk because of growing demand, The Independent revealed. Zurich-based Dignitas has begun discussions about setting up a British branch, even though it is illegal in Britian to help someone commit suicide. In the past three years, 37 Britons have killed themselves at this clinic and it claims to have hundreds of other British members. Euthanasia or assisted dying is banned in Britain. But the so called "death tourism" where people travel from the uk to end their lives in countries which permit it, is on the rise.

Meanwhile, Britain's House of Lords is to soon debate a bill on assisted suicide that would allow doctors to prescribe but not administer lethal drugs to terminally ill people. Under the bill, only "mentally competent adults" would be able to ask for assistance. Euthanasia is a controversial issue in Britain and both Anglican and Catholic church leaders have urged peers not to back the bill. Under the current law, Britons face 14 years in jail for helping a patient to die, a penalty that is among the harshest in Europe.