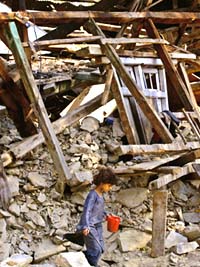 On October 8, 2005, a powerful earthquake, measuring 7.6 on the Richter scale, rocked Pakistan and India's northern border. More than 30,000 died and there was widespread damage. The death toll is still rising as Down To Earth goes to press.

The quake lasted for over a minute and its epicentre was very close to Muzaffarabad, capital of Pakistan-occupied Kashmir (pok). Maximum casualty was reported from pok and Jammu and Kashmir's Baramulla, Kupwara and Pooch districts.

The Indian Meteorological Department's (imd) seismological division remained clueless about the actual magnitude of the quake for over an hour, initially declaring the tremor's intensity as 6.8 on the Richter scale and then revising it to 7.4. imd's confusion stems from a moribund seismic monitoring system and also the fact that it is not part of the global seismic monitoring network. India's nuclear ambitions have prevented it from joining the Incorporated Research Institutions for Seismology (iris), Washington. This network has 128 sophisticated monitoring stations worldwide that provide accurate information. But, India decided to remain out of it as the network can pick up signatures of even not-so-powerful nuclear detonations.

Signficiantly, Union minister for science and technology Kapil Sibal and department of science and technology secretary V S Ramamurthy told the media after the Sumatra earthquake -- which triggered the recent tsunami -- that they would seek to end India's isolation from the global seismic monitoring network. Similar promises have been made this time, clearly indicating that precious little has been done in the nine months after the tsunami.