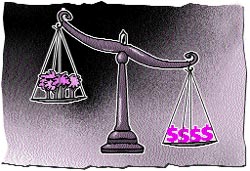 one year ago, Sri Lanka was asked to consider an unusual proposal by the us. The latter offered to waive the island nation's debt in exchange for control over four tropical forests. The Lankan government had then responded with an unequivocal 'No, thank you'. But with its back to the wall due to a deepening economic crisis, it has now been forced to rethink its stand.

The authorities' final decision is expected in November, according to reliable sources. "We are looking at the proposal very positively," says Thosapala Hewage, secretary in the ministry of forests and environment. "This will bring in much-needed financial support to conserve the forests in question," adds Hewage.

But not everyone shares his view. The new conservator of forests, Sarath Fernando -- like his predecessor Herath Bandaratilleke -- is against toeing the us line. "We see no great benefit from the deal for Sri Lankan forest conservation," argues Fernando, adding: "The ministry should carefully weigh the pros and cons of the proposal before taking any decision."

Significantly, an Asian Development Bank-funded seven-year forestry plan is already underway in Sri Lanka. But it is obvious that at a time when the country is reeling under a heavy debt burden, the government's move to reconsider the offer does not merely stem from the conservation angle.

The us is offering to write off Sri Lanka's debt to the tune of us $400 million if the latter accepts its conservation plan for four key forest areas in the island nation. The offer was made in April 2001 under the us Tropical Forest Conservation Act (tfca). Although a relatively new concept, the us embassy in Colombo insisted that such debt-for-nature swaps had worked well in Costa Rica, Bolivia and even Bangladesh.

"The 1998 act is designed to help reduce the debt burden of third world countries while helping them preserve threatened tropical forests," said us ambassador Ashley Wills, hard-selling the proposal last year. Sri Lanka's public debt stands at a staggering us $4 billion. In 2001, debt servicing exceeded government revenue by us $215 million. Struck by a triple whammy -- a civil war, a terrorist attack on the airport and energy crises -- the country recorded negative economic growth for the first time in 50 years. Against this bleak backdrop, it is not surprising that the authorities perceive the tfca proposal to be a concrete means to reduce the debt burden.

The money owed to the us (or a part of it) can be used to set up a trust. This would be overseen by a board comprising representatives of the Lankan government, non-governmental organisations (ngos) and the us. The trust will initiate programmes to preserve forests.

The tracts under consideration are largely concentrated in the wet, humid and mountainous central part of the country. At present, the woodlands -- Sinharaja rainforest, Peak Wilderness and Horton Plains, Knuckles, and Namunukula Ranges -- are all protected by the forest department (fd). Together, they constitute over 25 per cent of the country's forest cover.

The Sinharaja forest, declared a world heritage site by unesco (United Nations Educational, Scientific and Cultural Organisation), has a wide variety of flora and fauna. While 50 per cent of its trees are unique to Sri Lanka, 95 per cent of the country's rare domestic species of birds are found here. Knuckles and Peak Wilderness consist of some stunning cloud forests and are home to rare types of reptiles.

The us embassy in Colombo defends the proposal, stating that tropical forest conservation has been a top priority among us environmentalists and public for decades. But activists in Sri Lanka see hidden, ominous agendas behind the us offer.

By lending a hand to maintain sinks such as these rich rainforests, the us may try to dodge commitment to reduce emissions, alleges ngo Environmental Foundation Limited (efl). Global pressure group Greenpeace has also warned against "selling off" these forests to the us. In fact, the Lankan fd had turned down the offer last year because it feared that the act would give us research institutions unhindered access to the country's forests.

"Issues of ownership of genetic material, intellectual property rights, local community rights and future selling of rainforest services will all be compromised if this agreement comes through," warns efl director Hemantha Vithanage. Environmentalist Don Munaweera says: "Even if we abide by the tfca, Sri Lanka should retain control over natural resources."

But it remains to be seen whether a cash-strapped, donor-dependent Sri Lanka can successfully negotiate with the us on its terms. So that safeguards can be incorporated to protect its richest forests.