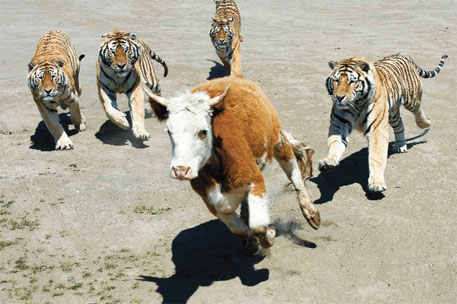 TIGERS have evolved to become one of the most ferocious predators in the cat family. At the genetic level, all big cats are quite close. But it is the small differences in the genes that distinguish them from each other. These are the findings of a latest study which has, for the first time, mapped theÃ”Ã‡Ãªwhole genome sequence of the Amur (Siberian) tiger and compared it with that of the domestic cat, white Bengal tiger, African lion, white African lion and snow leopard.

In the cat family, so far only the genome of the domestic cat had been mapped. For tigers, till now, most of the genetic research was concentrated on traditional sequencing approaches, mostly limited to non-functional DNAs. For the first time, a database of functional genes has been created.

TheÃ”Ã‡Ãªmapping was conducted on the genes of a nine-year-old captive male Amur tiger at the Genome Research Foundation in Suwon, South Korea. It showed how tigers gained their extensive muscle strength, the metabolism to digest large quantities of meat and a keen sense of smell which helps them hunt, find mate and demarcate territories. The mapping shows that the big cat is genetically very similar to the domestic one. “The tiger genome sequence shows 95.6 per cent similarity to the domestic cat from which it diverged approximately 10.8 million years ago,” says the study published in Nature Communications on September 17. The similarity between humans and gorillas that diverged around 8.8 million years ago is 94.8 per cent.

To understand what makes big cats distinct from each other, the study additionally sequenced genomes of a white Bengal tiger, an African lion and an Asian snow leopard. Two mutations were identified by the scientists which are likely to be responsible for the snow leopard’s adaptation to high altitudes and the white fur on white African lions.

Scientists believe genome mapping of the big cats can be aÃ”Ã‡Ãªbreakthrough in conservation efforts. “Our data from tigers, lions and snow leopards can provide a rich and diverse genome resource that could be used in future studies of conservation and population genomics so that the genetic underpinnings of local adaptation and potential inbreeding and/or out-breeding in wild and captive populations can be illuminated, and thereby help ensure the future survival of these majestic species,” claims the study.

Uma Ramakrishnan, scientist at the National Centre for Biological Sciences, Bengaluru, hopes the paper will pave the way for tiger genomics at the population level. “The study is quite significant, not so much in what it finds, but because of the doors it opens. It will help reveal what might be adaptations of tigers in particular environments.Ã”Ã‡ÃªOnce population-specific genome variants are characterised, it would help investigate cases of animal poaching,” she added.

However, for these efforts to work out, genomic information from wild tigers will be the next important step, says Ramakrishnan. Samrat Mondol, assistant professor at the Centre for Cellular and Molecular Platforms, Bengaluru, agrees, “The use of such data for tiger conservation is still in its nascent stage.

We need to start thinking of ways to utilise the genome sequences for more realistic field applications.” He says that the reference genome mapped can now be used in targeted genome sequencing of functionally important genes (for example MHC, a disease-resistance gene) from animals across different populations. This could provide very important information on disease resistance at the individual or population levels in inbred populations.

On the study’s significance for India, Priyvrat Gadhvi, Ahmedabad-based biotechnologist and India representative to the Genome Research Foundation, says India is the single most important country as far as the diversity of tigers, Asiatic lion and leopard is concerned. Data from this project will help in creating genetic tools to combat wildlife crime, he adds.