Researchers have decoded the genetic sequence of the bacterium responsible for cholera. This will aid in the development of new vaccines and medicines to fight the killer disease 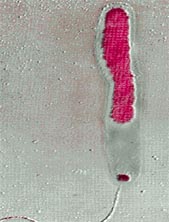 A TEAM of American scientist have decoded the genetic sequence of the bacterium, Vibrio cholerae. The sequence of El Tor, a destructive type of cholera bacterium, was deciphered by John Hedelberg of the Institute for Genomic Research in Rockville, Maryland, Rita Colwell of University of Maryland in Baltimore and John Mekalanos of Harvard Medical School.

For decoding the genetic sequencing of El Tor, the researchers cut the bacteria's de oxy ribonuelic acid (dna) into small pieces to find out the sequence of base pairs (the chemical "letters" in which all genetic information is stored). A computer was used to reassemble the resulting information.

They found out that El Tor's genome consist of two chromosomes, 3,900 genes and around four million base pairs. Nearly half of the genes in the bacterium are borrowed from other species and its most harmful toxin is actually synthesised by a viral gene, which got incorporated in it million of years ago.

The scientists hope that the decoding will help in developing new drugs and vaccines to fight cholera. According to Jennie Hunter Cevera, president of University of Maryland Biotechnology Institute, "The sequence provides a molecular window into understanding the life cycle of a bacterium, which occurs naturally in the aquatic environment and yet it proves to be destructive human pathogen."

According to Mekalanos, the sequence reveals a number of metabolic pathways (the various ways by which food is burned to produce energy), which may be useful for anti-cholera drug development, For example, the sequence shows that El Tor produces an enzymes which completely breaks down fucose, a sugar found in human intestine. If future experiments prove that such genes are essential to the bacterium's growth in the intestine then small molecules might be administered to prevent El Tor from eating up fucose, thereby making its survival difficult.

Several cholera vaccines are currently available in the market but none of them are entirely satisfactory. Some of the vaccines available are not able to stimulate the immune system in the desired manner while others have unpleasant side effects. Knowing the sequence of the genome, the researchers can now pinpoint the genes that are responsible for these side effects and hence they can find ways of deactivating them.

To understand why there are sudden cholera outbreaks the scientists are going to compare the genetic framework of El Tor with that of non-pathogenic types of bacteria. The researchers may not be able to completely eradicate the killer disease but now they have found the way for more definite and comprehensive future research.